“Beyond Europe” – President of the Socialist International 1976–1992 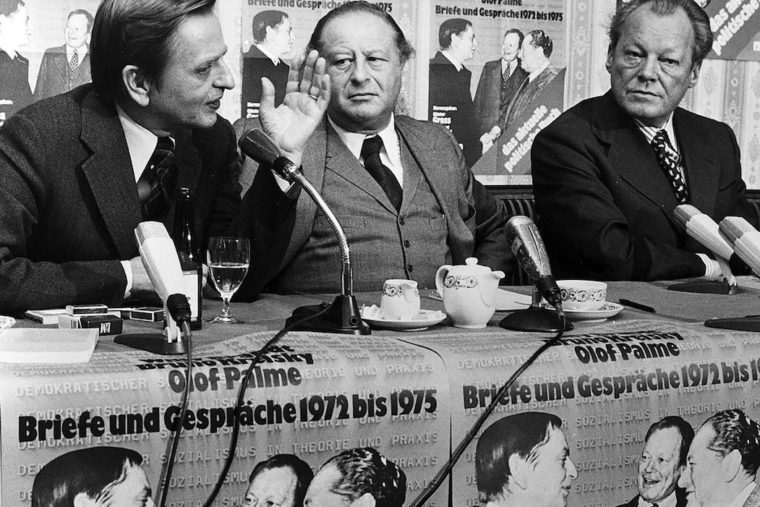 Palme (l), Kreisky (centre) and Brandt at the presentation of their book “Briefe und Gespräche” in Frankfurt, 9 October 1975
© ullstein bild-AP 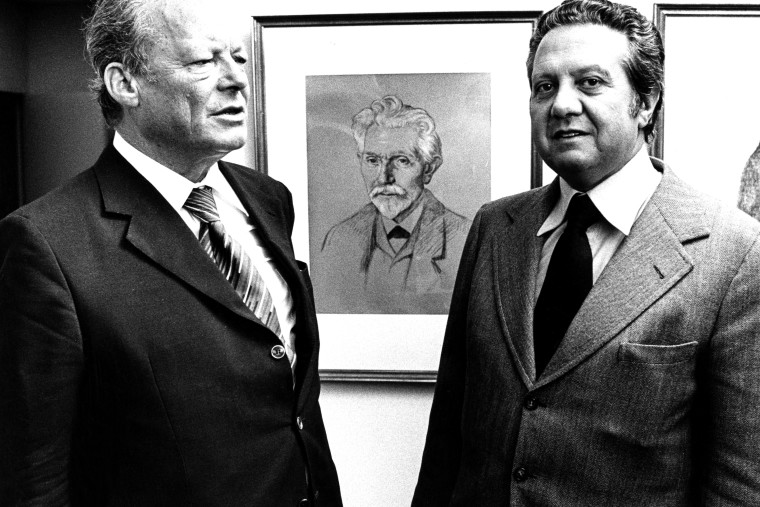 Meeting of Willy Brandt and Mário Soares (r), the leader of the Portuguese Socialists, in Bonn, 19 May 1976
© J.H. Darchinger/Friedrich-Ebert-Stiftung 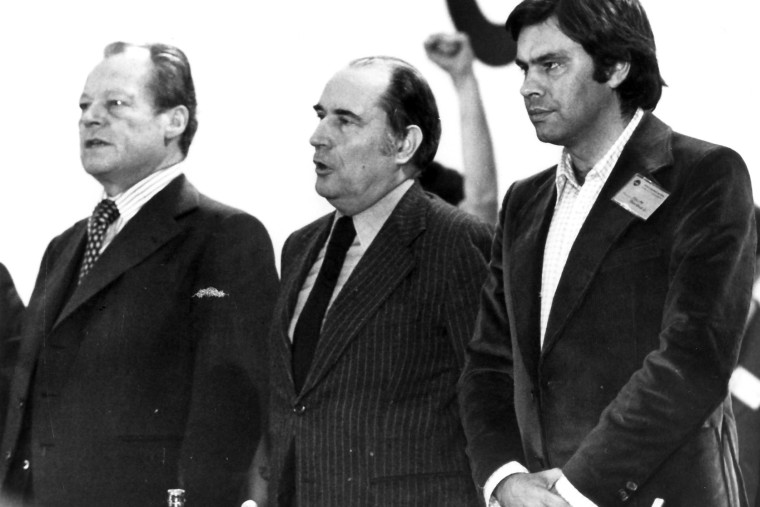 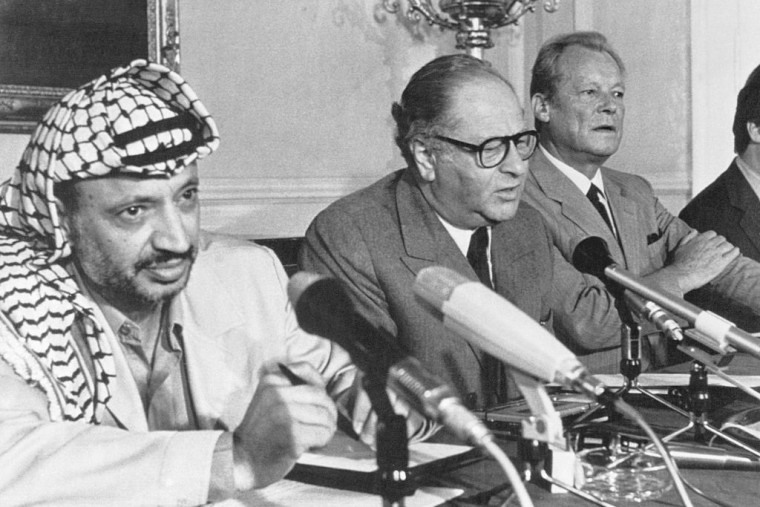 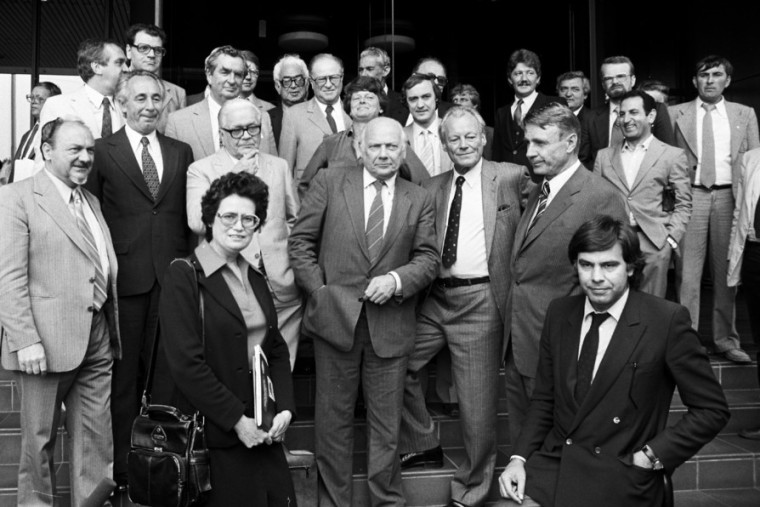 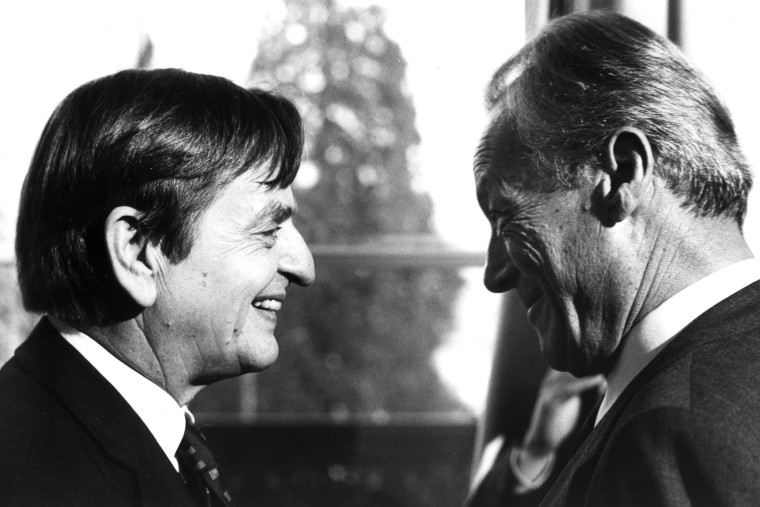 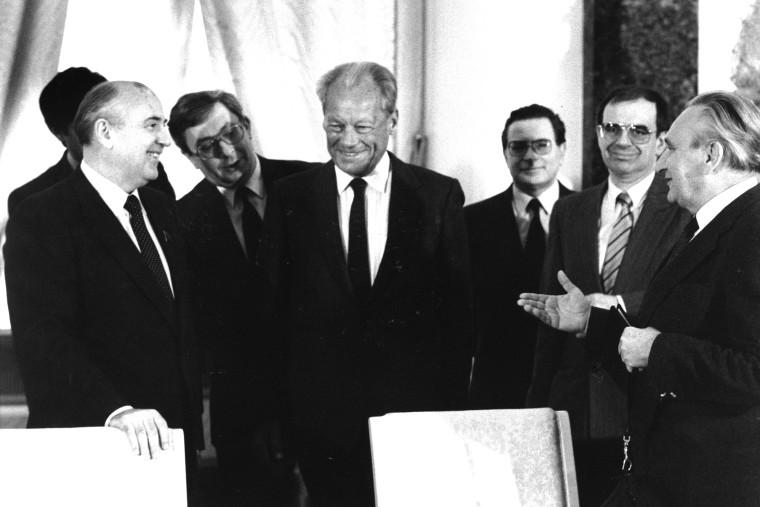 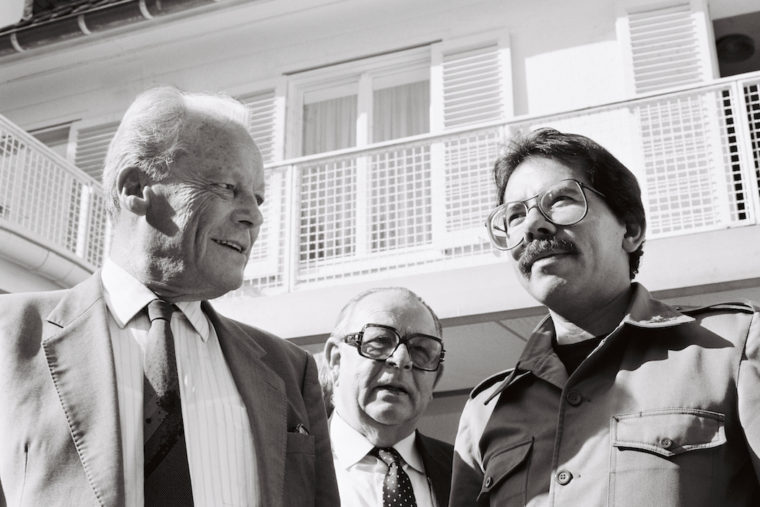 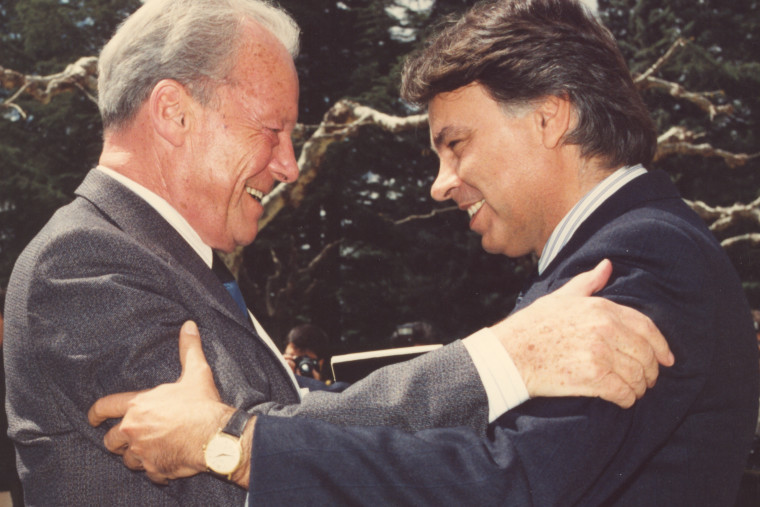 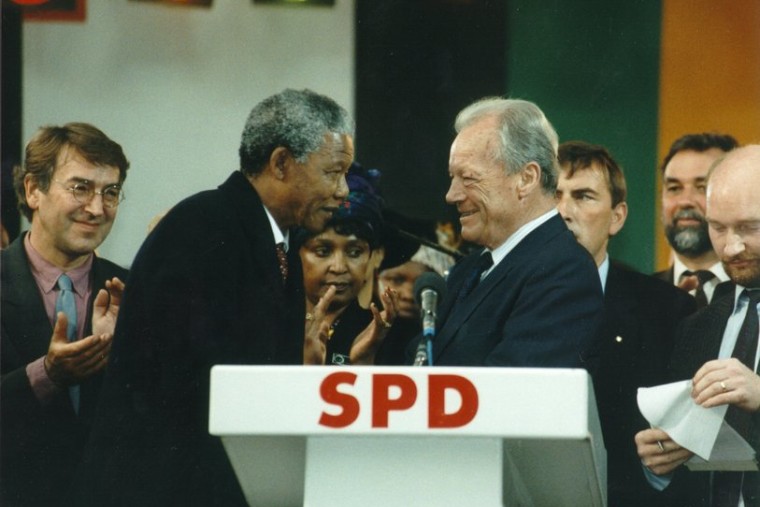 As President of the Socialist International from 1976 to 1992, Willy Brandt attracts more attention in world politics for the nearly insignificant organisation. For the first time the association of socialist and social democratic parties under his leadership becomes active beyond Europe and admits new members, mostly from Latin America. Together with his political friends, Brandt campaigns internationally for peace, democracy and human rights. Regional focal points of his efforts are Central America, South Africa, Eastern Europe and the Middle East.

Only after months of careful consideration is the SPD chairman, Willy Brandt, ready to take on the Presidency of the Socialist International in 1976. The principal reason for his hesitation is the deplorable condition wherein the organisation, founded in 1951 with headquarters in London, finds itself at the time. Even though its tradition dates back to the International Workers’ Association of 1864, the SI has ceased for decades to play a major role in worldwide politics.

However, based on the exceptionally high renown which the former German Chancellor and Nobel Peace Prize laureate enjoys internationally, soon after Brandt’s assumption of office on 26 November 1976 in Geneva, interest in the Socialist International increases intensely. For the first time, the foreign ministries of the USA and the Soviet Union send observers to symposia of the SI. The increasing significance of the International can be read as well in the ever more intensive media reports about it. Despite its growing worldwide political importance, however, it remains a fairly informal organisation whose decisions are not binding on its member parties.

A fundamental deficiency of the Socialist International which Willy Brandt would like to remedy is its focus on Europe. In 1976, its member parties come overwhelmingly from the old continent. Along with Kreisky and Palme, Brandt has been calling since the early 1970s for a worldwide co-operation of left-leaning reform elements. The three leading heads of European social democracy are seeking most of all dialogue with parties and movements in the “Third World” which are close to the idea of socialism but do not originate from the tradition of workers’ movements.

Latin America especially is in their sight. Here Brandt can tie in with the “Alliance for Peace and Progress”, proclaimed by him in 1975. This discussion forum – still outside the SI structures – has brought together first in May 1976 in Caracas 13 European and 15 Latin American parties. In May 1978, the International arranges a similar meeting with African parties in Dakar (Senegal).

The policy of opening and expansion is successful. By 1980 the non-European member parties in the SI are in the majority. During Willy Brandt’s Presidency it succeeds in raising the number from 13 to 34. The International gains numerous new partners, most of all in Latin America and in the Caribbean, but also in Africa. However, the downside of this rapid growth is the admission of parties, i.e. from Panama, Grenada, Tunisia and Egypt, which do not satisfy minimal standards of democracy.

In his inaugural address at the Geneva Congress in 1976, Willy Brandt announces a special offensive of the SI for human rights. As a result, for the first time in its history, the International puts itself on the side of liberation movements which, with weapons in hand, are fighting against political repression and social injustice.

Thus Brandt demonstrates solidarity with the revolutionaries in Nicaragua, who brought down its decades-long dictatorship in 1979. At the same time, however, he repeatedly criticises in the 1980s the too close alignment to communist guidelines by the Sandinistas under Daniel Ortega. In El Salvador, the SI President sympathises with the leftist FMLN liberation movement which includes local social democrats and which is fighting against the conservative military junta backed by the USA. At the same time, Brandt and his friends become involved in efforts to end the civil war in the country. His associate in Bonn, Klaus Lindenberg, and the SPD politician, Hans-Jürgen Wischnewski, frequently travel to Central America on his behalf and conduct many discussions there with the parties in conflict.

The struggle against the racial dictatorship in South Africa is also part of the SI offensive for human rights. In 1978 the International takes up direct contacts with the ANC, the organisation of black South Africans. In the mid-1980s, a long-sceptical Willy Brandt comes to the conclusion that the white apartheid regime in Pretoria must be put under pressure from outside with economic sanctions. He and the SI also agitate for the release of Nelson Mandela who has been incarcerated since 1962. When the ANC leader visits Bonn shortly after his release in 1990, it is his express wish to meet Brandt and thank him for his support.

For peace and détente

One of the most important subjects for Willy Brandt and the Socialist International is security policy. Because the East-West conflict becomes more perilous between 1979 and 1984. With great concern about peace, the SI President and his associates endeavour to preserve the remains of détente policy and, where possible, develop it further.

Brandt attempts to make the International into a forum for exchanges of opinions transcending political blocks. This is rendered difficult, though, by the fact that there are within the SI considerable differences on issues of security policy. In 1983 the German social democrats, who advocate giving priority to disarmament, reject the deployment of US medium-range nuclear weapons in the course of NATO’s dual-track decision. By contrast, France’s socialists favour the deployment, which in their view re-establishes the balance of deterrence toward the Soviet Union.

After the General Secretary of the CPSU, Mikhail Gorbachev, takes office in 1985, an intensive dialogue develops between the SI and the Soviet Union. Both sides speak in favour of the concept of “Common Security.” Brandt and the International welcome the far-reaching disarmament proposals by Gorbachev.

Beginning with the collapse of communist regimes in 1989, Eastern Europe shifts into the focus of attention of the Socialist International. When Gorbachev rises to speak at the SI Congress in Berlin in 1992, this is a highly symbolic sign for the defeat of communism and the assertiveness of the idea of democratic socialism.

However, Willy Brandt’s expectation of 1989/90 that a social democratic renaissance would come about in Eastern Europe turns out to be mistaken. Indeed, many of the previous communist state parties there profess their dedication to social democracy, but the Eastern European civil rights movements turn for the most part to classical liberalism.

Successful by contrast are Brandt’s years of courting the Communist Party of Italy which already broke with the Soviet Union in the 1970s. In 1990/91, the CPI completely abandons Leninist-style communism and changes its name. It joins the SI in 1992 as the “Democratic Party of the Left.”

Limited engagement in the Middle East

Differently than in Central America, Brandt and the Socialist International are hardly in demand as mediators in the Middle East Conflict. In the 1970s and 1980s, Kreisky, Palme and Soares undertake fact-finding missions for the SI in the Middle East without, however, without bringing about a rapprochement between Israel on the one side and the Arabs and Palestinians on the other.

In the cases where he becomes active himself, the SI President always favours including all parties of a conflict in the search for a peaceful solution. In 1979, Brandt and Kreisky meet in Vienna for the first time with Yasser Arafat, the head of the Palestine Liberation Organisation (PLO). In 1990/91, Willy Brandt attempts to convince the Iraqi dictator, Saddam Hussein to voluntarily withdraw his troops from Kuwait – in vain. But he is able to obtain the release of some Western hostages from Iraq.