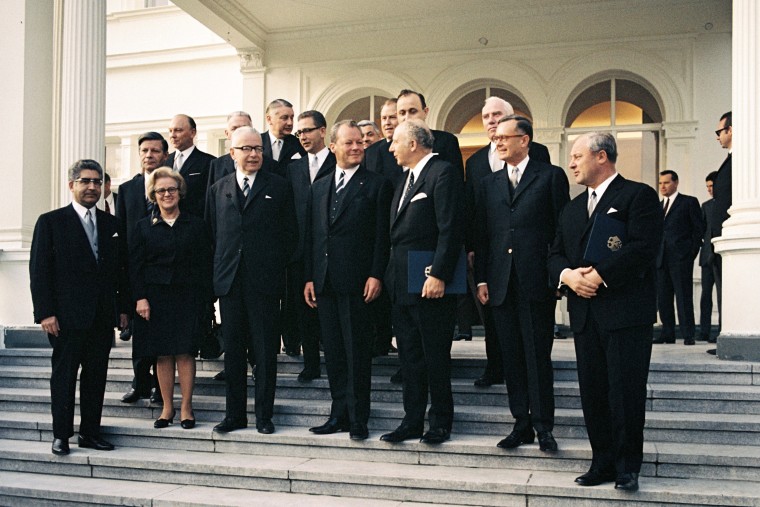 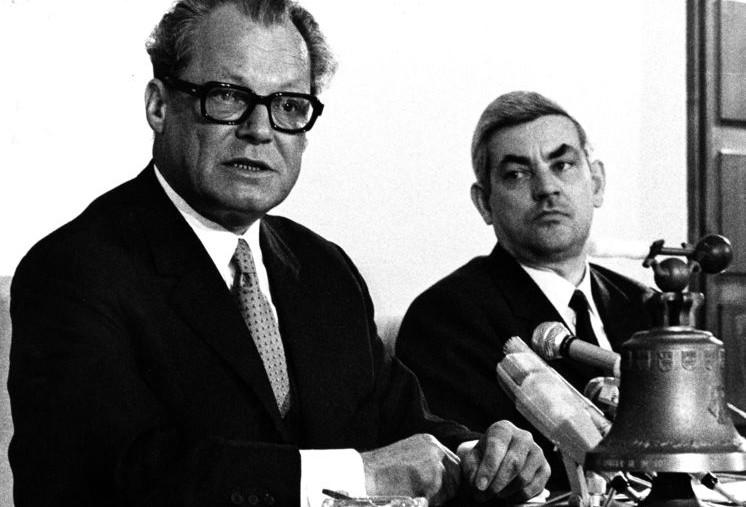 Chancellor Willy Brandt and the Head of the Chancellery Horst Ehmke during a Cabinet meeting in Bonn, 1970
© J.H. Darchinger/Friedrich-Ebert-Stiftung 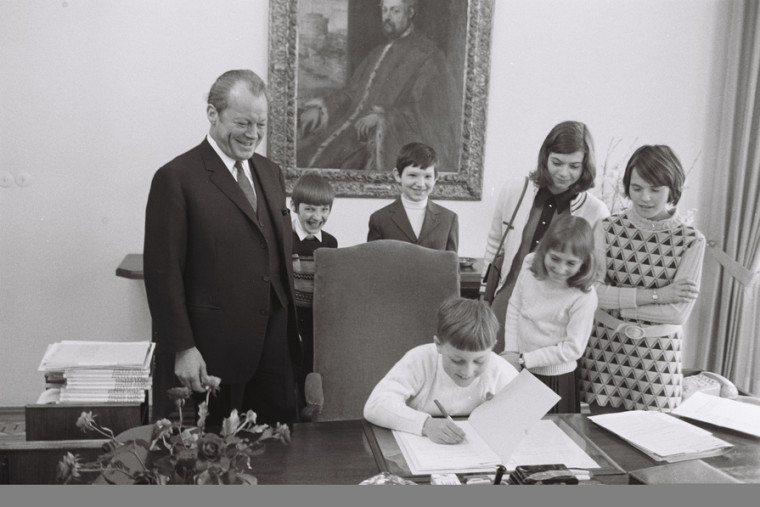 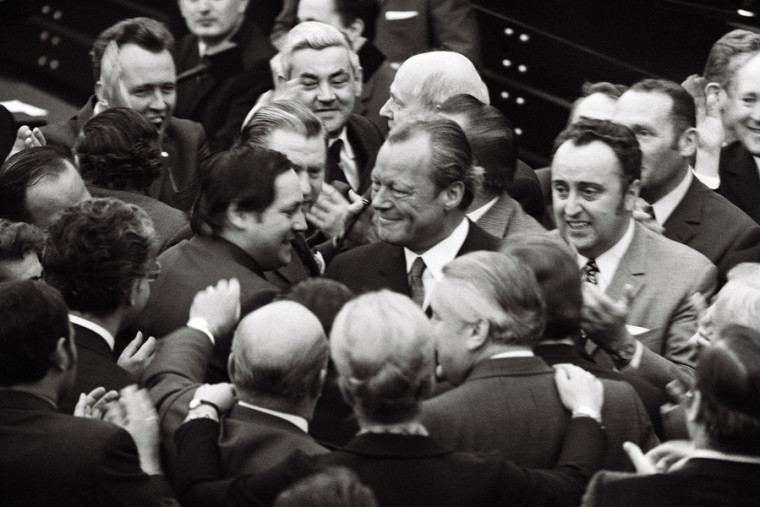 Willy Brandt surrounded by jubilating SPD representatives after the announcement that the CDU/CSU's constructive motion of no confidence has failed, 27 April 1972
© Bundesregierung/Detlef Gräfingholt 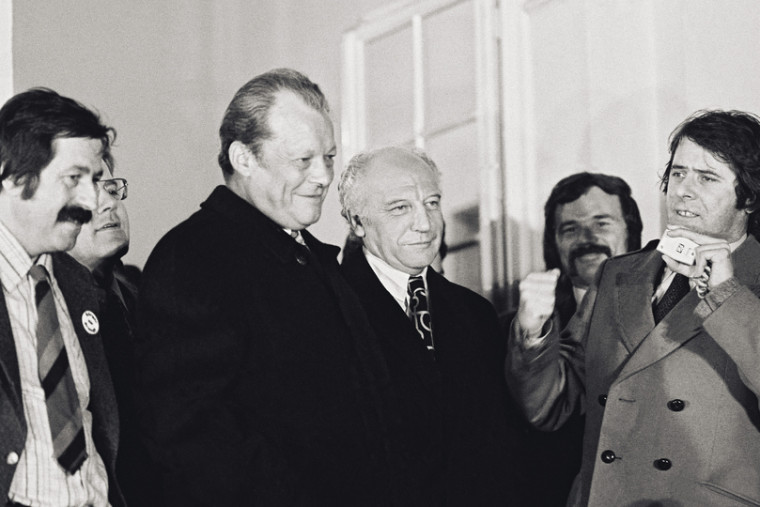 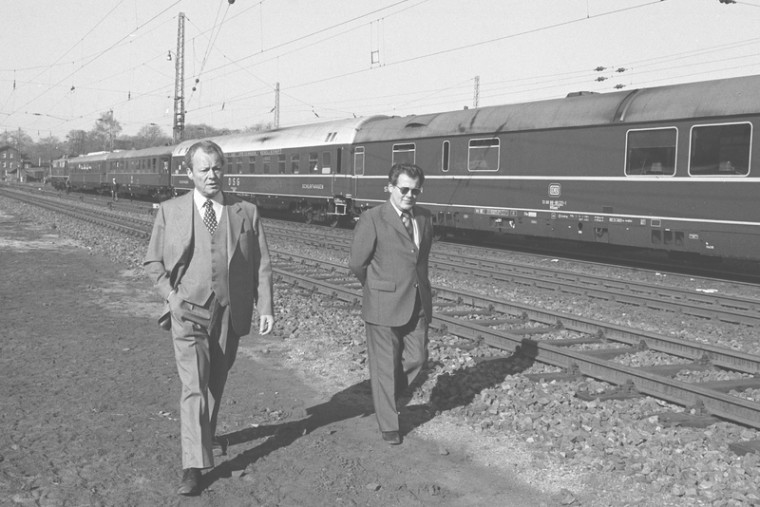 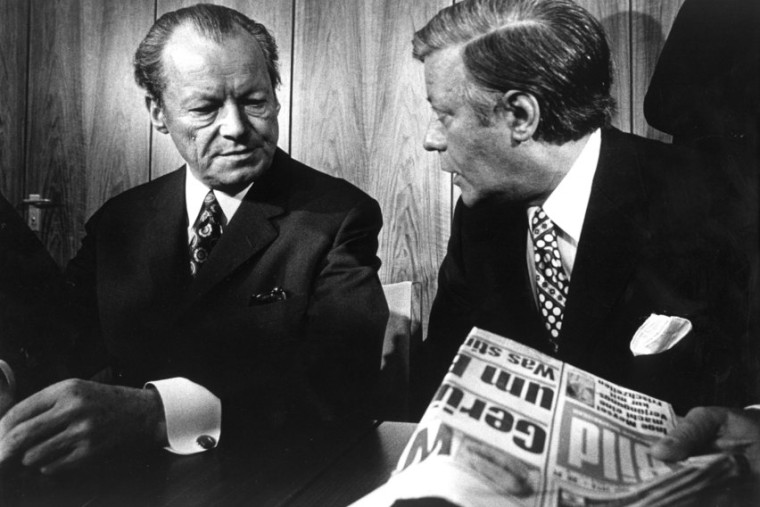 Willy Brandt, resigned from the Chancellorship, and his designated successor Helmut Schmidt, 7 May 1974
© J.H. Darchinger/Friedrich-Ebert-Stiftung

Reforms characterise the term in office by the first social-democratic Chancellor of the Federal Republic of Germany: The social-liberal coalition under Willy Brandt expands civil liberties, facilitates more democratic participation and strengthens the welfare state. The opposition fights with utmost rigour against the policies of the Brandt/Scheel government. Despite this, the CDU and CSU fail in their attempt to replace the Chancellor. With the SPD and FDP’s clear election victory in 1972, the “Brandt Era” reaches its zenith. However, due to international crises and economic upheavals, his reform policies soon run into limitations, and as a consequence, Brandt comes under fierce criticism. The cause of the Chancellor’s resignation in 1974 is the Guillaume espionage affair.

Change of power in Bonn

The Bundestag elections on 28 September 1969 provide the SPD and FDP a slight majority in parliament. During the evening of the election day, Willy Brandt speaks out against continuing the Grand Coalition with the CDU/CSU. Instead, he offers a coalition to the FDP chairman, Walter Scheel, with whom he has a close, trusting relationship.

The change of power in Bonn was already introduced at the time of the Federal Presidential election in March 1969 when, with their votes, the Liberals helped the social-democrat Gustav Heinemann to a majority. Now the SPD and FDP quickly come to an agreement on the formation of a new federal government which the Union parties, the CDU and the CSU, are not a part of for the first time since 1949.

On 21 October 1969, the Bundestag elects Willy Brandt the first social-democratic Chancellor of the Federal Republic of Germany. Walter Scheel becomes Foreign Minister and Vice Chancellor. His party friend, Hans-Dietrich Genscher, takes over the Ministry of the Interior. Additional key positions on the SPD side are held by Finance Minister Alex Möller, Economics Minister Karl Schiller, Defence Minister Helmut Schmidt and Horst Ehmke, who as chief of the Federal Chancellery co-ordinates the details of government policy. With Käte Strobel (SPD), who holds the portfolio for Youth, Family and Health, there remains as in the past only one female minister in the federal cabinet. In the Chancellor’s office, the SPD politician, Katherina Focke becomes parliamentary state secretary.

In his first government policy statement one week after his election as Chancellor, Willy Brandt comments on the goals of the social-liberal coalition. In the field of domestic and social policy, he announces the continuation and strengthening of the reform course begun by the Grand Coalition. His leitmotif is: Citizens should be able to take part maturely and with self-assurance in the decision-making process in government and in society. Two sentences in Brandt’s speech especially illustrate this: “We want to dare more democracy” and “We want a society which offers more freedom and asks for more joint responsibility.”

The domestic policy programme of reforms which the coalition of SPD and FDP implements until 1972 is extensive. Among other things, it includes:

To finance its reform policies, the Brandt/Scheel government optimistically assumes that high economic growth rates will continue. However, despite good economic activity and full employment, the considerably increased expenditures of the federal budget can only be covered from the very beginning through a significant increase in the national debt.

Sharply rising prices give the social-liberal coalition much to deal with. Fomented by the decline of the US dollar and stiff wage increases, the rate of inflation in Germany soon climbs to over 5%. In a dispute over the correct counter-measures, Finance Minister Alex Möller resigns in 1971. His successor, Karl Schiller, who as a “super minister” is also responsible for the economics portfolio, takes his leave a year later.

Failure of the constructive vote of no confidence

The CDU/CSU opposition fights with utmost rigour against the government led by Willy Brandt. Especially bitter is its disagreement with the “new Ostpolitik.” Due to defections of individual SPD and FDP representatives to the CDU/CSU faction, the narrow majority of the social-liberal coalition in the Bundestag melts away. In spring 1972, the CDU chairman, Rainer Barzel, believes he has enough parliamentarians behind him to remove Brandt through a constructive vote of no confidence and be able to become Federal Chancellor himself.

However, his plan fails. On 27 April 1972 in a tensely anticipated vote in the Bundestag, surprisingly Barzel falls two votes short, therefore Willy Brandt remains Chancellor. Right away, rumours of bribery circulate. Not until 1990 is it revealed that in 1972 the East German communist regime paid two CDU/CSU representatives 50,000 DM to not vote for Barzel. It still remains unclear whether the opposition or the government factions also made use of any money to obtain a majority.

Since neither the coalition of SPD and FDP nor the CDU/CSU has a governable majority in the Bundestag, both sides agree to hold early elections. The 1972 election campaign electrifies and polarises the Federal Republic. More citizens than ever before become involved politically. Members and sympathisers of the SPD enthusiastically get behind Willy Brandt. Not least of all, in the “Sozialdemokratische Wählerinitiative (SWI)” (“Social Democratic Voters’ Initiative”) initiated by Günter Grass, prominent journalists, artists and intellectuals also support the Chancellor.

The internationally well-respected statesman and Nobel Peace Prize laureate is highly popular with a majority of Germans. His reform-minded and open governing style appeals especially to younger people. Brandt is venerated and loved by his supporters, but by his opponents he is often vilified and hated. Again, extreme right-wing groups initiate smear campaigns against him.

The Bundestag elections on 19 November 1972 become a personal triumph for Willy Brandt. With 45.8% of the votes, the SPD achieves the best result in its history. Since the FDP makes gains as well, the social-liberal coalition can continue to govern with a stable majority. For Brandt, this alliance represents the “Neue Mitte” (“New Centre”) in the Federal Republic. Concurrently, in his eyes it symbolises the historical reconciliation between the workers’ movement and liberalism in Germany.

Nonetheless, the start of the new legislative period goes badly for the governing coalition. The struggle over the ratification of the Eastern treaties and the election campaign have cost Willy Brandt a considerable amount of strength. His health has been seriously affected, and the Chancellor is not able to participate in coalition negotiations. Important decisions are made without him or forced upon him. Among them is the replacement of the Chancellery chief of staff, Horst Ehmke, by Horst Grabert, which turns out to be a serious mistake.

Because the money is not available, the social-liberal coalition has to cut back on its domestic policy reform goals. That disappoints many SPD supporters who have quite different expectations after an election victory. Among them there is also considerable dissatisfaction with the so-called “decree on radicals.” Agreed on in 1972 by the Federal Chancellor and the Minister Presidents of the “Länder” (German federal states), this examination of all applicants for Public Service jobs by the “Bundesamt für Verfassungsschutz” (the domestic intelligence service of the Federal Republic) is intended to keep political extremists out of the civil service. In practice, however, all of those who are to the left of the SPD or are even involved in it come under general suspicion of anti-constitutional activities. For that reason, i.e., many of those affected are denied teaching positions.

The greatest challenge for Brandt and his government are the unexpected difficulties which mount up in the course of the year 1973: The international currency system collapses, in several branches of industry there are week-long strikes, and finally Arab countries make crude oil scarce and expensive with intermittent production and supply stoppages.

The oil crisis in autumn 1973 has a long-lasting shattering effect on the belief in unstoppable progress and shows that sources of raw materials are not inexhaustible. Euphoria for reform abruptly dies down. The West German federal government imposes drastic energy saving measures. But it is unable to prevent the resulting decline in economic growth, the continued rise of inflation and the sharp increase in unemployment.

The accusations are growing that Federal Chancellor Willy Brandt is a weak leader and does not concern himself enough with domestic policies. The harsh public criticism is especially bitter since it comes from his own ranks, especially from Herbert Wehner, Helmut Schmidt and Günter Grass. In early 1974, when the trade unions, contrary to Brandt’s express will, put through an 11% increase in pay rates for Civil Service jobs, the Chancellor’s prestige sinks to a new low.

In spring 1974, things are beginning to look up again. Brandt is determined to reorganise his cabinet and revitalise the work of the government. But it turns out differently. Günter Guillaume, who since late 1972 has been one of three personal secretaries in the Chancellor’s office and responsible for contacts to the party organisation and to the SPD faction, is arrested on 24 April 1974.

By all appearances a loyal associate who accompanies the Chancellor on many trips, Guillaume is actually an officer of the East German secret service (Stasi). Although suspicions first arose in May 1973, the personal secretary has not been transferred. In that regard, Brandt followed the advice of the “Bundesamt für Verfassungsschutz”, Günther Nollau, and the Minister of the Interior, Hans-Dietrich Genscher (FDP) – a decision which he now deeply regrets.

Speculation soon arises that Guillaume knows compromising facts about Brandt’s private life. They originate from a dossier of the “Bundeskriminalamt” (“Federal Criminal Police Office”) that does not remain secret. When media reports on its contents are being prepared and a new campaign of vilification against him threatens to reignite once more, Willy Brandt decides to relinquish his office. The Chancellor assumes the political responsibility for the espionage affair and resigns on 6 May 1974. Brandt’s supporters are shocked. On 16 May 1974, the Bundestag elects Helmut Schmidt (SPD) to be his successor as Federal Chancellor.