“Now what belongs together will grow together” – German unity 1989/90 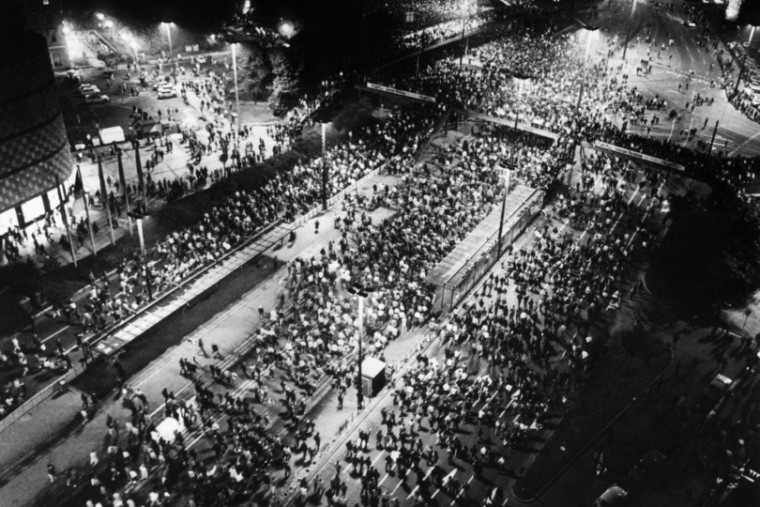 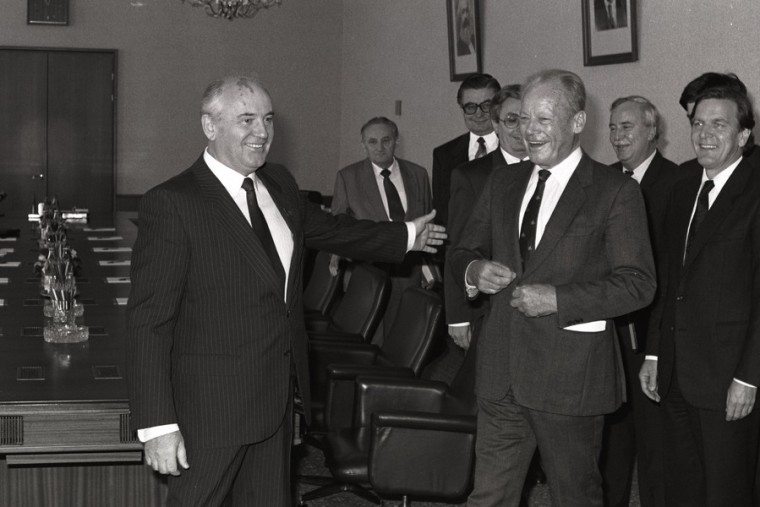 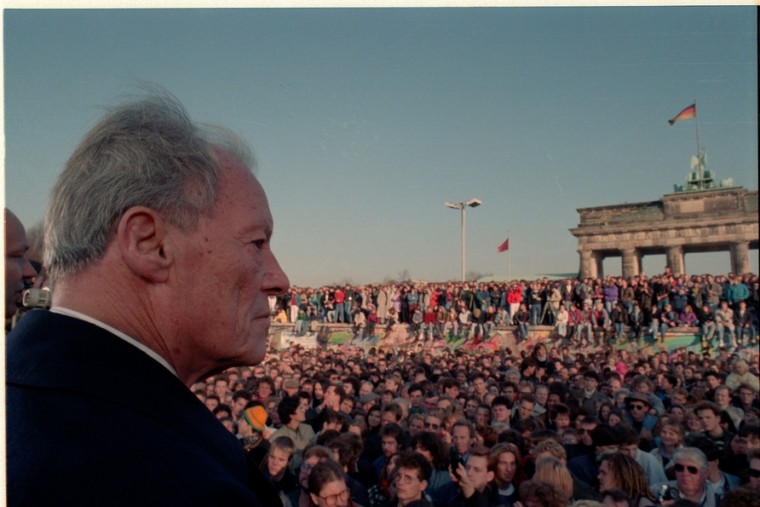 Willy Brandt in front of the Brandenburg Gate on the day after the fall of the Berlin Wall, 10 November 1989
© William Palmer Mikkelsen 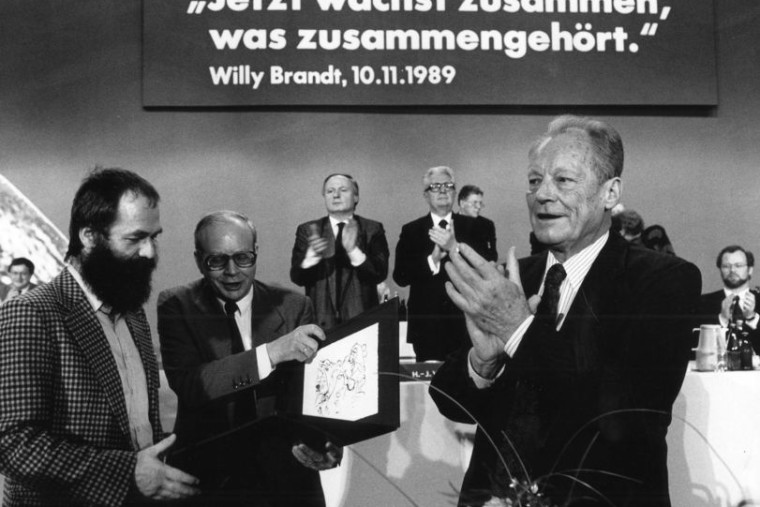 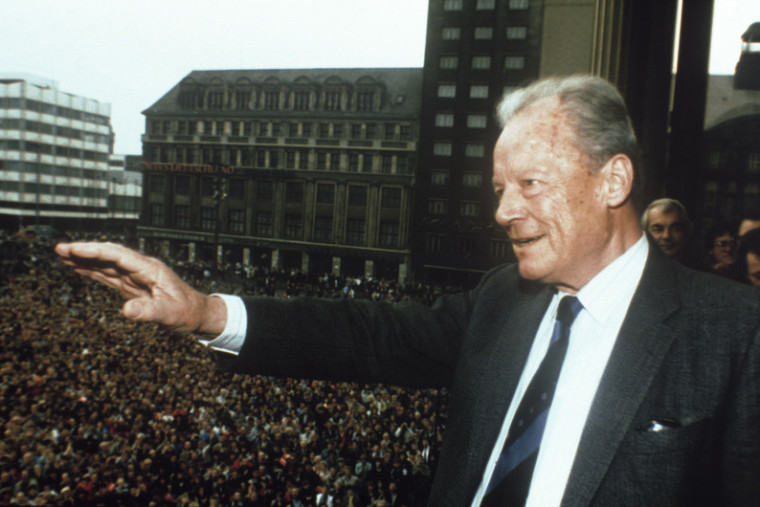 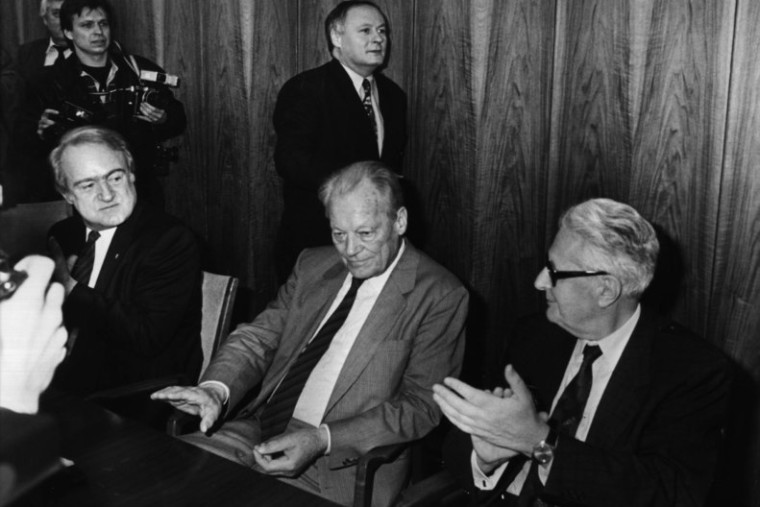 Applause for the SPD honorary chairman: Brandt sitting next to Rau (l) and Vogel (r) and with Lafontaine in his back, 14 June 1990
© Fotoagentur Sepp Spiegl 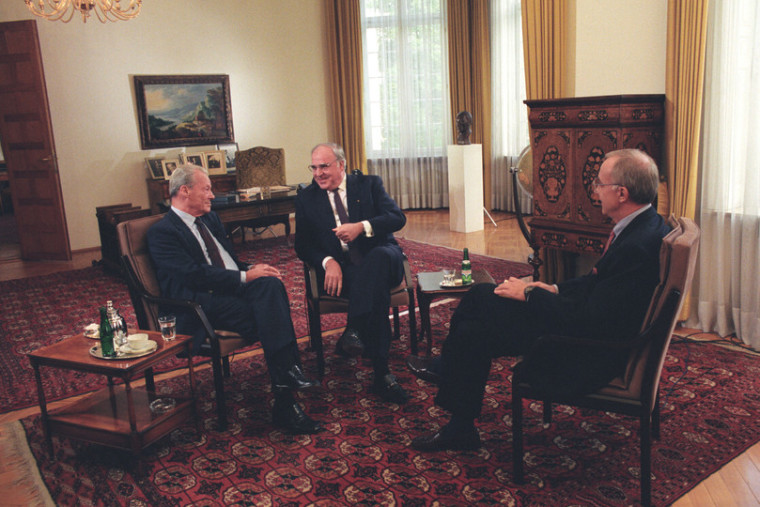 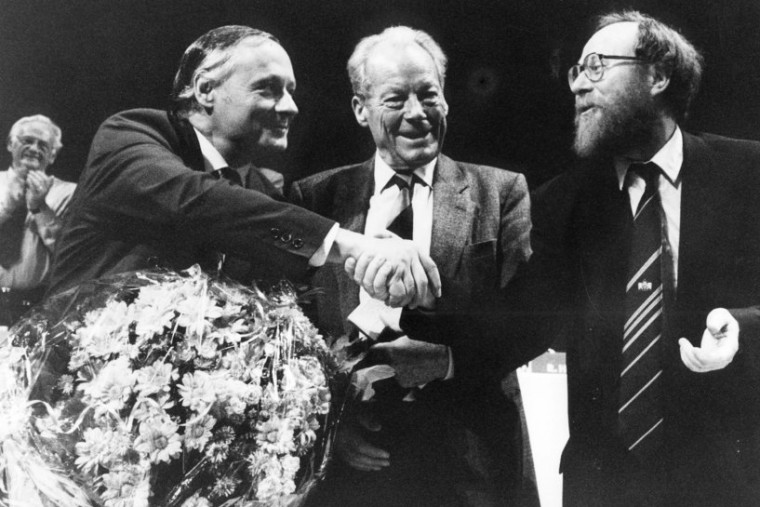 VIP stand in front of the Reichstag building in Berlin during the celebration of German unity, 3 October 1990
© Bundesregierung/Christian Stutterheim 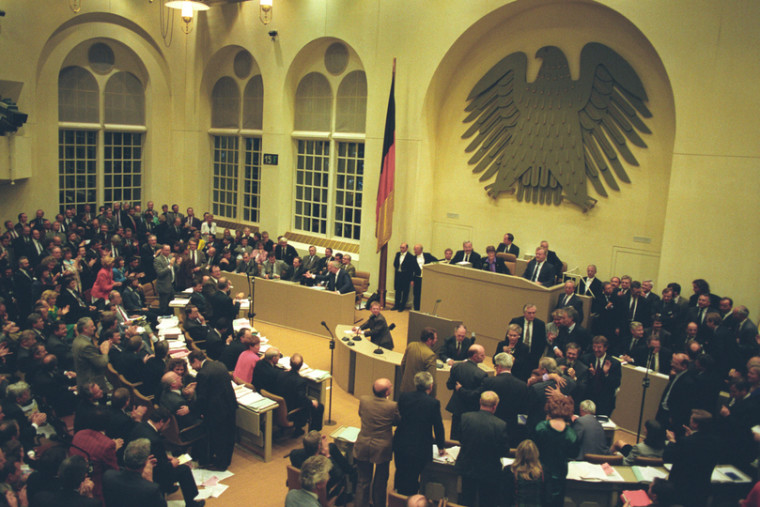 The German Bundestag in Bonn, moments after the announcement of the voting result in favour of Berlin, 20 June 1991
© Bundesregierung/Arne Schambeck

During the collapse of communist regimes, which first begins in 1989 in Poland and Hungary, Willy Brandt recognises the historic opportunity to overcome the division of Europe and Germany. When East Germans flee to the West in masses and simultaneously hundreds of thousands of their compatriots demonstrate for freedom and democracy, the SED dictatorship in the GDR also comes to an end. With the fall of the Berlin Wall on 9 November 1989 and the Peaceful Revolution, a dream is fulfilled for Brandt. With enthusiasm the SPD honorary chairman supports the merging of the two German states. The unification of Germany in 1990 is the crowning achievement of Willy Brandt’s life’s work. His campaign for Berlin to be the seat of government and parliament of re-united Germany is also successful.

Eastern Europe between departure and isolation

After the statement by the Soviet General Secretary, Mikhail Gorbachev in late 1988, to the effect that each country has the right to choose its own path, the decades-long firmly established order in Eastern Europe begins to show movement. However, the communist regimes allied with the Soviet Union react very differently to the unprecedented freedom to decide granted by Moscow.

In February 1989, the communists in Hungary introduce a step-by-step transition to a multi-party system. At a “Round Table” in Poland in early April 1989, the government comes to an agreement for sweeping reforms with the opposition led by the trade union “Solidarność.” The partly free elections which take place subsequently bring about an overwhelming victory for Solidarność and lead in August 1989 to the election of Tadeusz Mazowiecki as the first non-communist Prime Minister of the post-war era.

By contrast, the rulers in other Eastern Bloc countries strictly reject a liberalisation of their dictatorships through reforms and instead intensify their oppression. In the GDR, the SED regime led by Erich Honecker massively manipulates the results of local elections in May 1989. This election fraud, which opposition groups discover and make public, re-enforces the dissatisfaction of the population with communism. People begin to assemble for initial, still small protest demonstrations.

Intuition for the epoch-making upheaval

Earlier than other politicians, Willy Brandt senses the epoch-making upheaval and the imminent end of European and German division. The SPD honorary chairman is convinced that the profound changes in Eastern Europe will also encompass the GDR. In summer 1989 he puts the following sentences on paper for his soon-to-be-published book, “Erinnerungen” (“Memoirs”): “Why, with what right and based on which experience, exclude the possibility that someday in Leipzig and Dresden, Magdeburg and Schwerin – and in East Berlin – not only hundreds, but hundreds of thousands will stand up and demand their civil rights? (…) And Berlin? And the Wall? The city will live, and the Wall will fall.”

Late in the summer of 1989, when thousands of GDR citizens can flee to the West by way of Hungary, and at the same time more and more people in the GDR demonstrate against the rule of the SED, Brandt pleads for a new policy on Germany. In a speech in the Bundestag on 1 September 1989 he makes it clear that from now on there must be more at stake in the relationship between the Federal Republic and the GDR than “through many small steps to help preserve the cohesion of separated families and along with that of the separated nation.” For the former Chancellor, the order of the day is soon to be the realisation of “self-determination and unity” of the Germans.

“Turnaround,” fall of the Wall and Peaceful Revolution in the GDR

In mid-October 1989, the SED regime reacts to the flight of refugees and to the ballooning protests in the cities of the GDR, particularly the Monday demonstrations in Leipzig, with a change in leadership. However, the new General Secretary, Egon Krenz, who replaces Erich Honecker, cannot stabilise the situation for his party despite all his “Wende” (“turnaround”) promises. The unintended opening of the Berlin Wall and of the intra-German border on 9 November 1989 accelerates the SED’s loss of power and in the end helps the Peaceful Revolution in the GDR to a breakthrough.

On the morning after the fall of the Wall, Willy Brandt flies to Berlin. Deeply moved and thinking back to the construction of the Wall in 1961, the former Governing Mayor comments in an interview on the opening of the border with these words: “Now we are in a situation in which what belongs together will grow together.” In stating this, Brandt stresses that this sentence refers not only to Germany but to Europe as a whole.

Late in the afternoon of 10 November 1989, at a rally in front of Schöneberg Town Hall, attended also by Federal Chancellor Helmut Kohl (CDU) and Foreign Minister Hans-Dietrich Genscher (FDP) among others, the SPD honorary chairman calls for holding free elections in the GDR. On the very same evening, he meets in East Berlin for the first time with representatives of the SDP, the newly founded Social Democratic Party of the GDR.

Soon after the fall of the Berlin Wall, the call for the unity of Germany grows ever louder. At many appearances which he makes in the GDR starting in December 1989, Willy Brandt learns that a vast majority of East Germans wants unification with the Federal Republic as quickly as possible. The former Chancellor understands and supports this wish. For this reason he turns decisively against the sceptics in the SPD, most of all Oskar Lafontaine and Günter Grass, who wish to give preference to European unity or reject a German national state with reference to Nazi crimes.

However, in contrast to the 1950s, Willy Brandt no longer cares to speak of “re-unification.” His distancing from this term already did begin in the late 1960s and intensified even more in the course of the 1980s. Brandt causes quite a stir with his statement from the year 1988 to the effect that “the hope for re-unification (has become) virtually a life-long illusion” of the old Federal Republic. He is fiercely attacked by conservative politicians and publicists for this verbal formulation which is also found in his “Erinnerungen” (“Memoirs”).

Brandt is troubled by the German prefix “wieder” (“again” = “re-”), which in his opinion can be misunderstood as a return to the Bismarck Reich and as tenaciously holding on to the German borders of 1937. With a view to the future structure of the relationship between the two German states, he consciously speaks therefore of a “neo-unification.”

Comparable only to Chancellor Kohl, Willy Brandt stands out in 1989/90 as a national figure of integration through his clear commitment to German unity. Brandt enjoys an equal degree of utmost prestige in the East and in the West. In the election campaign to the GDR Volkskammer (People’s Chamber), he is the popular driving force for the East-SPD which also names him its honorary chairman. Brandt is disappointed by the victory of the East-CDU and the surprisingly weak showing by the social democrats in this election on 18 March 1990.

However, that does not prevent the 76-year-old from supporting the continued acceleration of the process of unification and to welcome it. Despite criticism of some details, Brandt agrees fundamentally with the policies of the Federal Chancellor. As concerns the exterior aspects of unification, he has no objections – except for Kohl’s handling of the recognition of Poland’s western border. Brandt is also strongly in favour of united Germany’s continued membership in NATO.

Dispute and break with Lafontaine

Meanwhile, with regard to the tempo and the structure of German unity, there are profound differences of opinion between the SPD honorary chairman and the party’s Chancellor candidate, the Minister President of the Saarland, Oskar Lafontaine. Counter to the latter’s expressed wishes, Willy Brandt together with the party chairman, Hans-Jochen Vogel, prevails in having the SPD vote in the Bundestag for the currency union as well as for the Unification Treaty in the summer of 1990.

This dispute leads to a break between Brandt and Lafontaine. First and foremost, the former Chancellor attributes to the man from the Saar and to his lack of enthusiasm for German unity responsibility for the serious defeat of the SPD in the first all-German Bundestag elections on 2 December 1990.

Fulfilment of a dream

With the GDR’s accession to the Grundgesetz (Basic Law), the constitution of the Federal Republic, on 3 October 1990, Germany’s national unity is restored. On the VIP stand in front of Berlin’s Reichstag Building, Willy Brandt attends the midnight ceremony with tears in his eyes. At this moment a dream has been fulfilled for him, the realisation of which was made possible in the first place by his Ostpolitik.

Crowned with success as well is his committed campaign for Berlin to be not merely the nominal capital city of united Germany. On 20 June 1991, the Bundestag, after a tense debate, votes with a narrow majority for moving the seat of government and parliament from the Rhine to the Spree.