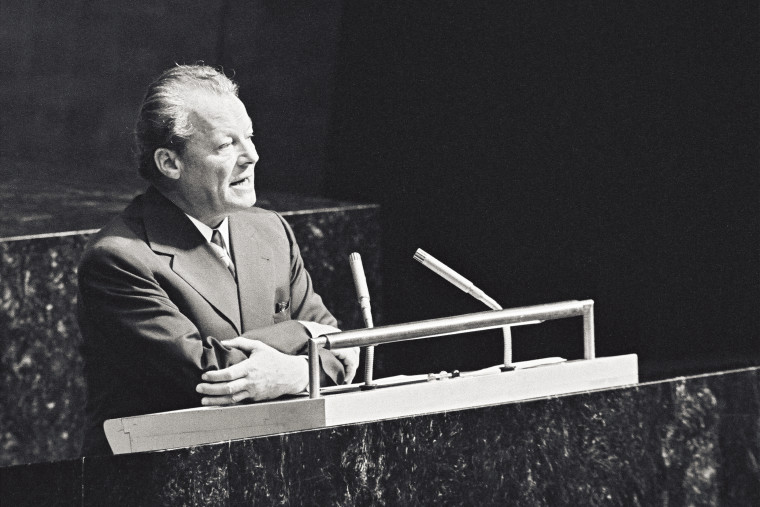 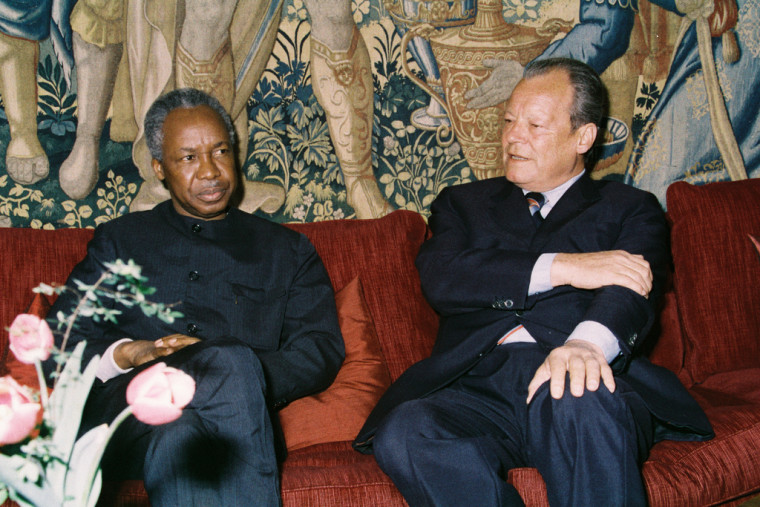 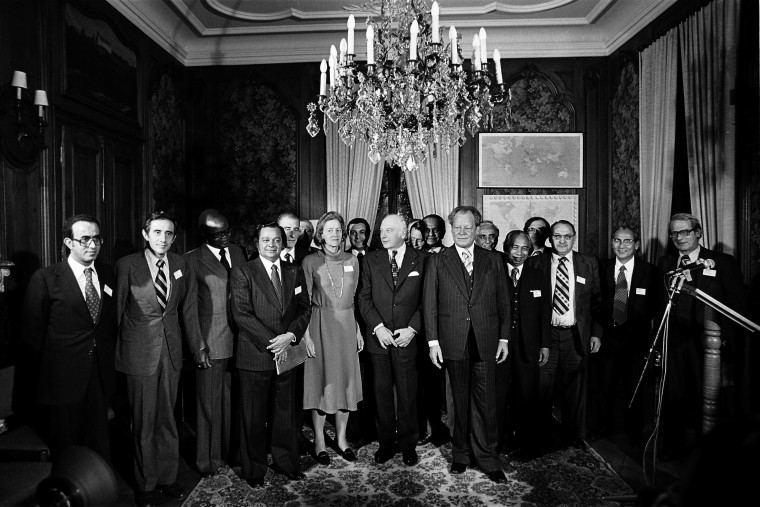 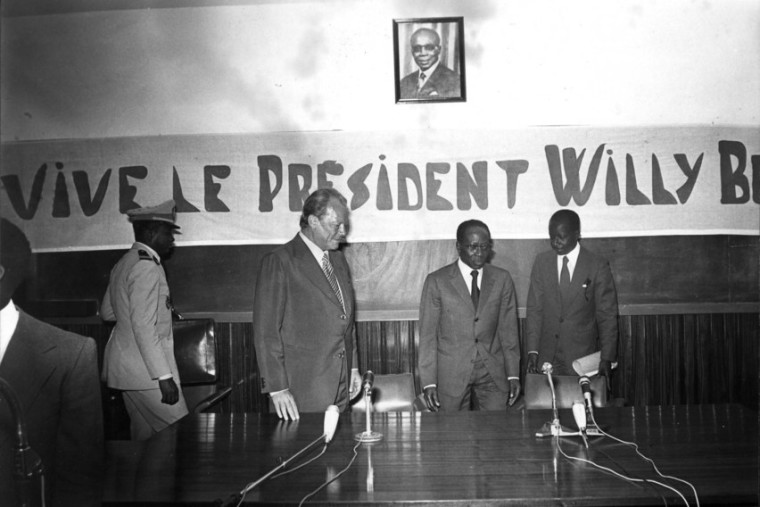 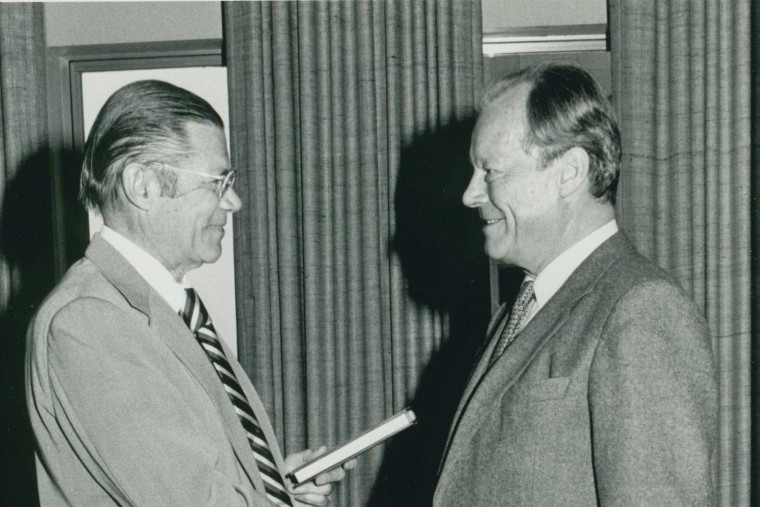 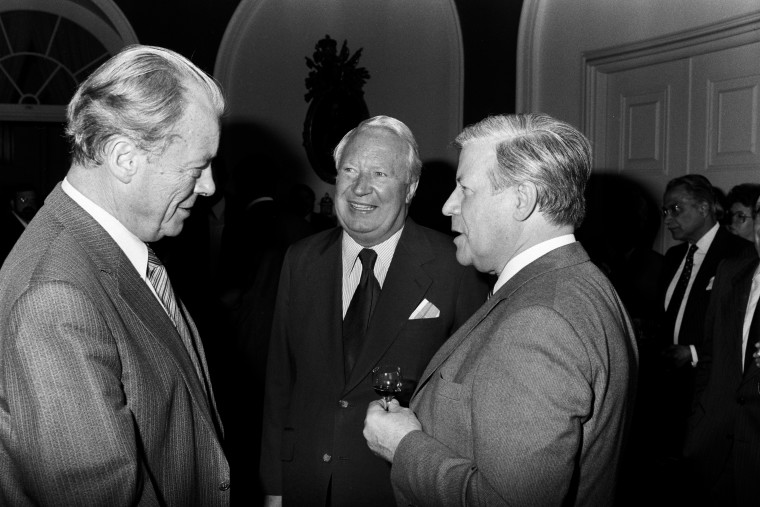 Chancellor Schmidt (r) as guest of the North South Commission in conversation with Brandt and Heath (centre) in Berlin, 29 May 1981
© Bundesregierung/Klaus Lehnartz 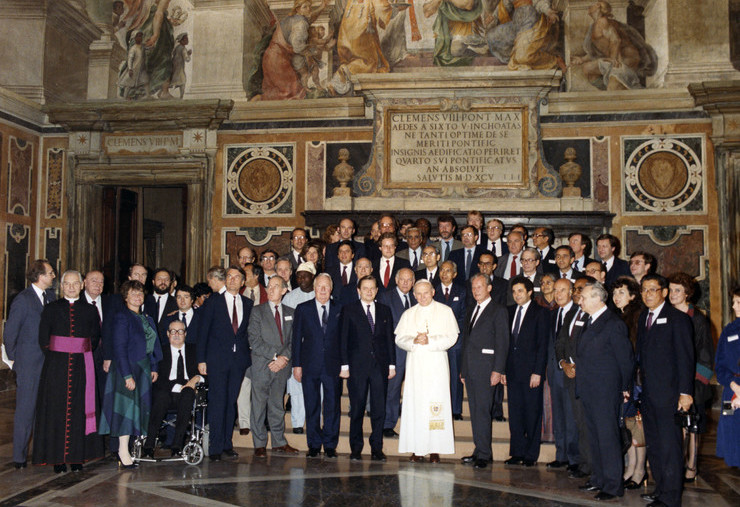 The members of the Brandt and the Palme Commission with Pope John Paul II in the Vatican, 21 January 1984
© Archiv der sozialen Demokratie, Bonn/L'Osservatore Romano 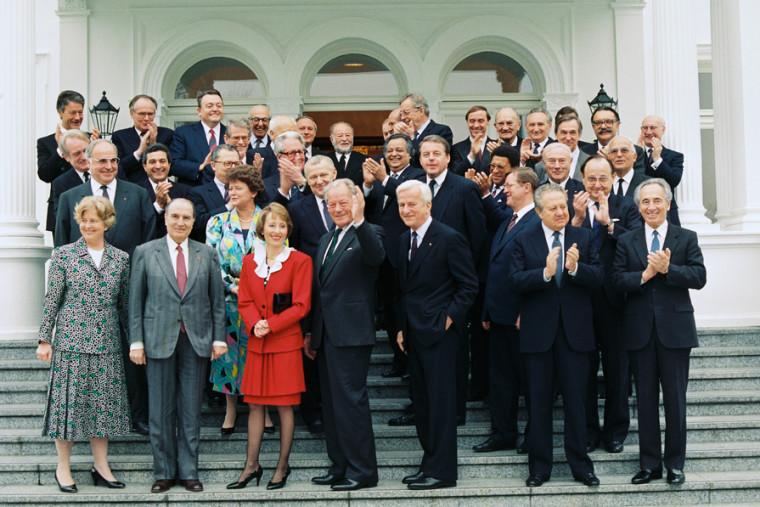 Reception for the 75th birthday of Willy Brandt at the Federal President's residence Villa Hammerschmidt in Bonn, 20 January 1989
© Bundesregierung/Arne Schambeck

His whole life Willy Brandt speaks strongly for the elimination of hunger and poverty in the world. Beginning in 1977 in the North-South Commission which he chairs, he campaigns for better co-operation on development and for reforms in the global economy. The Commission’s reports of 1980 and 1983, which emphasise all countries’ mutual interest in survival, issue numerous proposals. Most of all, Brandt calls for spending more money on development and less on armaments. As a prophetic thinker on globalisation and the idea of a “world domestic policy,” he offers in the early 1990s important stimuli for the concept of “Global Governance.”

Early contacts to the “Third World”

All of his life, Willy Brandt considers the fight against hunger and poverty, for peace and more justice in the world to be a moral and humanitarian obligation. During his Scandinavian exile he already becomes particularly interested in the colonial populations of Asia and Africa, many of which gain their independence after World War II.

He experiences his first personal encounters with the so-called ”Third World” as Governing Mayor of Berlin and later as West Germany’s Foreign Minister on trips to Asia, Africa and Latin America. On these occasions his discussion partners include leading figures of the non-aligned movement such as Jawaharlal Nehru (India), Gamal Abdel Nasser (Egypt), Jomo Kenyatta (Kenia) and Julius Nyerere (Tanzania).

New approaches and missed opportunities in the Chancellor era

But in the years 1969 to 1974, development policy does not occupy a central position in the Federal Chancellor’s work, although the government led by Willy Brandt does enter new territory in this area: In 1971, the social-liberal cabinet adopts the first development policy conception by a federal government, one which is presented by the responsible minister, Erhard Eppler. This conception views development policy as an approach to “world domestic policy.” This thought also runs through the speech which the Chancellor delivers to the United Nations in September 1973 in New York on the occasion of the admission of the Federal Republic into the UN. In it Brandt calls for a common struggle against poverty in the world and states: “Wherever hunger is prevalent, peace cannot endure for long.”

However, the SPD-FDP government does not fulfil its promise to significantly raise its expenditures for development aid. A main reason for this is the drastic increase in oil prices in the autumn of 1973 which causes serious international economic turbulence. The oil crisis dramatically exacerbates the North-South conflict. Specifically the non-aligned developing countries, associated in the “Group of 77” (G77), want to create a dependence on raw materials by the industrialised nations as a kind of leverage for implementing a “New International Economic Order” which they are demanding.

Founding of the North-South Commission

In January 1977, World Bank President Robert McNamara gives Willy Brandt a strong impetus for concerning himself intensively, after his time in government, with the relationship between industrial and developing countries. Quite by surprise McNamara recommends the former German Chancellor for the chairmanship of an international commission which, with new ideas, is tasked with overcoming the stagnation in North-South relations.

After an initial hesitation, Brandt is ready to face the challenge. As was the case with his “new Ostpolitik,” he hopes to defuse the dispute through constructive dialogue by both sides and be able to transform conflict into co-operation. He conceives of development policy as a new, global dimension of peace and détente policy. But at first, McNamara’s initiative encounters fierce resistance among some of the G77 countries so that Brandt is not able to announce the founding of the “Independent Commission on International Development Issues” (ICIDI) until late September 1977.

A total of 21 notable politicians and experts from eight industrial and eleven developing countries constitute the “North-South Commission” or “Brandt Commission.” The most prominent members besides the chairman are the British conservative Edward Heath, the Swedish social democrat Olof Palme, the Chilean Christian democrat Eduardo Frei Montalva, the American publisher Katharine Graham and the Guyanese politician Shridath Ramphal.

Since the ICIDI represents quite a broad political spectrum, its deliberations turn out to be difficult. After two years of work and ten meetings in Europe, America, Africa and Asia, Brandt and his colleagues are on the verge of failure in autumn 1979. However, at the last minute they manage to reach agreement on a common closing document.

In mid-February 1980, Willy Brandt gives the Commission’s report with the title “North-South: A Programme for Survival” personally to UN Secretary General Kurt Waldheim, to World Bank President Robert McNamara and to US President Jimmy Carter.

The Brandt Report, which adheres to Keynesian economic ideas, contains numerous proposals: Development expenditures of industrial countries are supposed to increase to 0.7% by 1985 and to 1% of the respective gross national product by the year 2000. In addition, obstacles and restrictions to world trade should be removed and countries on the South of the globe be better integrated into the international economy. Further recommendations aim at an increase in food production, a worldwide energy strategy, a reform of the World Bank and the International Monetary Fund (IMF) as well as the founding of a World Development Fund.

In his striking and much admired introduction to the report, Willy Brandt states that it lies in the interest of all nations, in view of the perils and challenges presented by increasing globalisation, to improve and develop international co-operation. Above all he calls for spending less money for armaments and clearly more for development.

Although many governments around the world fundamentally welcome the report of the North-South Commission, they hardly implement its recommendations for action. The main causes are the intensification of the East-West conflict and a new international economic crisis in the early 1980s.

The only visible consequence of the Brandt Report is the first North-South summit which takes place in October 1981 in Cancún (Mexico). However, the meeting of 22 heads of state and government from all over the world, which goes back to an idea of Brandt’s, ends without tangible results.

Alarmed by the broadening economic and debt crisis, the Brandt Commission presents a second report in 1983. It takes particular aim at the classic liberal (neo-conservative) economic and financial policies of the administration of US President Ronald Reagan, which also favour for development policy a free market economy and private investments.

Even after the dissolution of his Commission in 1984, Willy Brandt does not let go of the North-South issue. With utmost acrimony, he criticises the super powers’ spending on armaments while hunger is increasing in the world. To investigate this connection, he establishes in 1986 the “Stiftung Entwicklung und Frieden” (“Foundation for Development and Peace”) in Bonn.

Willy Brandt’s North-South commitment also develops a lasting effect through two further panels which imitate his example and adopt his idea of mutual interests. For one, there is the “Independent Commission on Disarmament and Security Issues” led by Olof Palme, which in 1982 releases its report on “Common Security.” For another, there is the “World Commission for Environment and Development,” chaired by Gro Harlem Brundtland and producing the report “Our common future” in 1987.

Once again it is Brandt who suggests the further development of the three concepts in early 1990. Following the end of the East-West conflict, “Global Governance” is his vision. At the initiative of the German elder statesman, a working group is formed in Stockholm which presents to the international public in April 1991 proposals for a reform of the United Nations and the international system. Based on this “Stockholm Initiative”, a year later there emerges the “Commission on Global Governance” headed by Ingvar Carlsson and Shridath Ramphal but which Willy Brandt is no longer able to take part in.