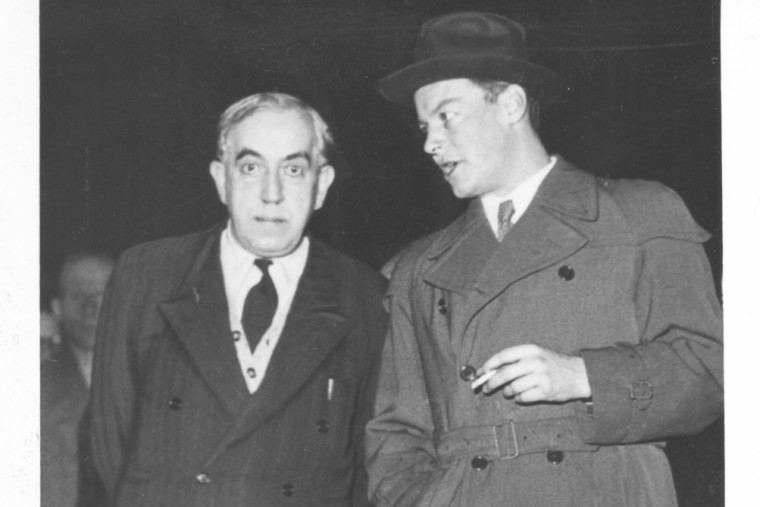 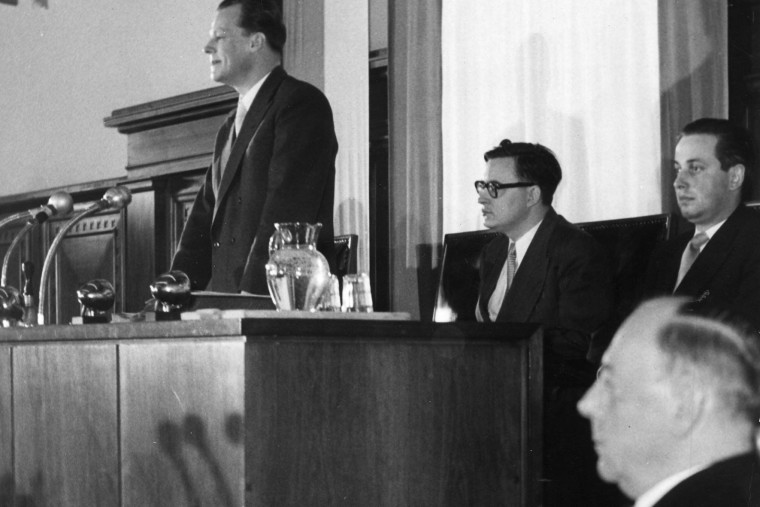 Willy Brandt (l) takes the office of President of the Berlin House of Representatives (on his right side: Klaus Schütz), 11 January 1955
© Archiv der sozialen Demokratie, Bonn 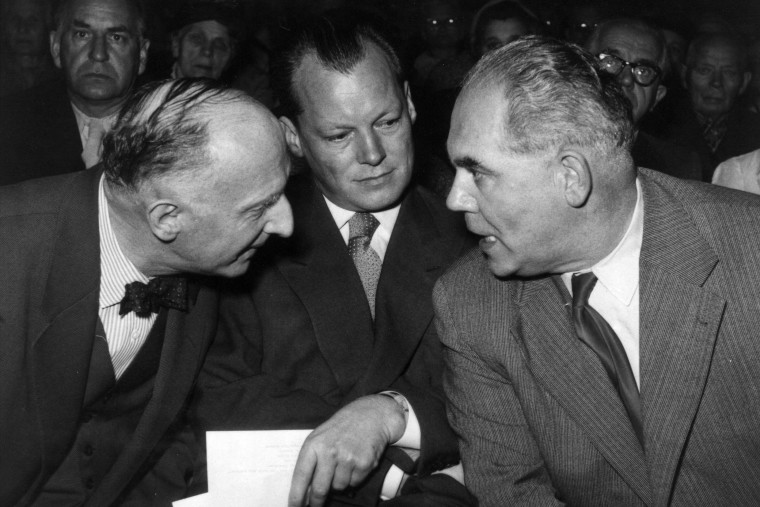 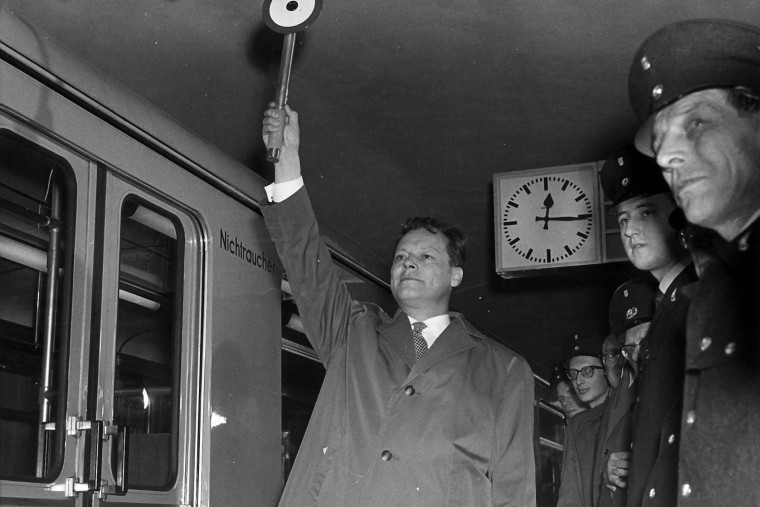 Governing Mayor Willy Brandt at the opening of the subway line U6 in West Berlin, 31 May 1958
© Landesarchiv Berlin 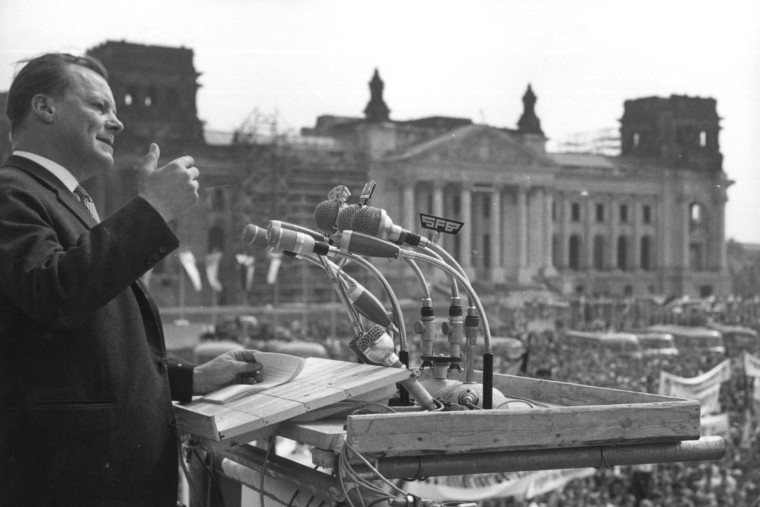 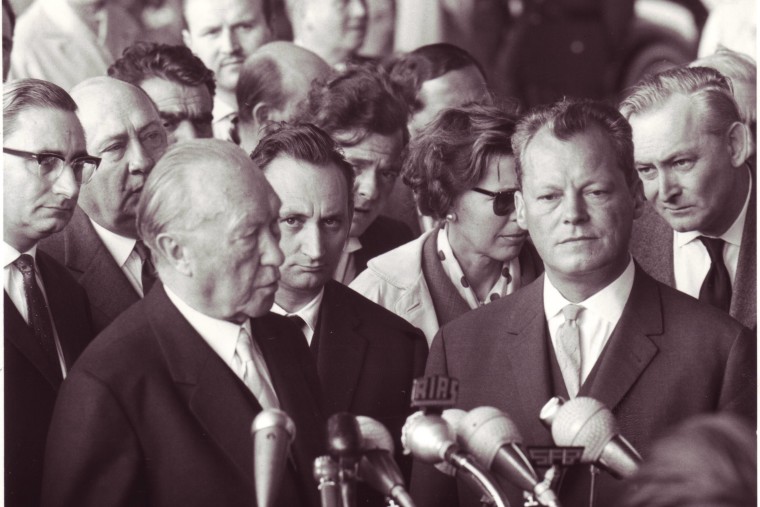 A GDR banner installed at the Berlin Wall in Wilhelmstrasse, 20 November 1961 – It reads: “Don’t get bold, Mr. Brandt, we are good shooters.”
© Landesarchiv Berlin/Bert Sass 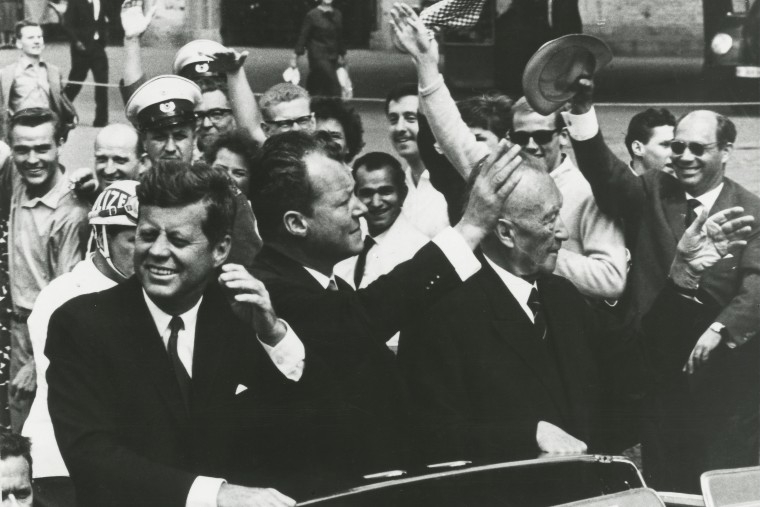 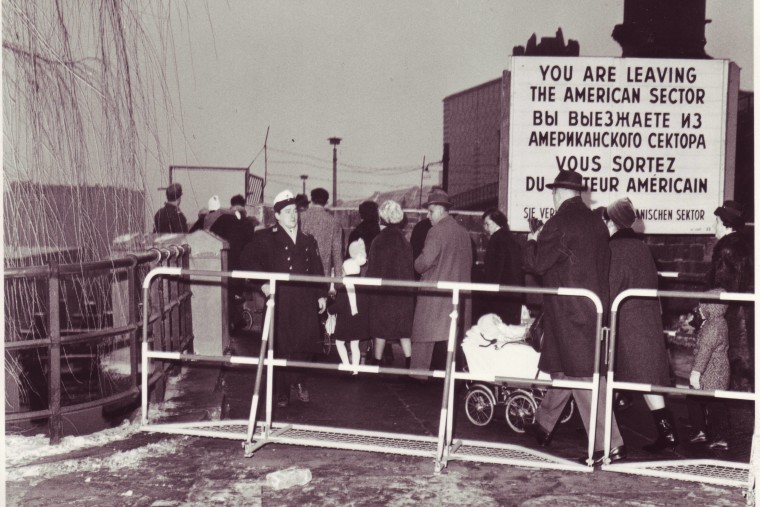 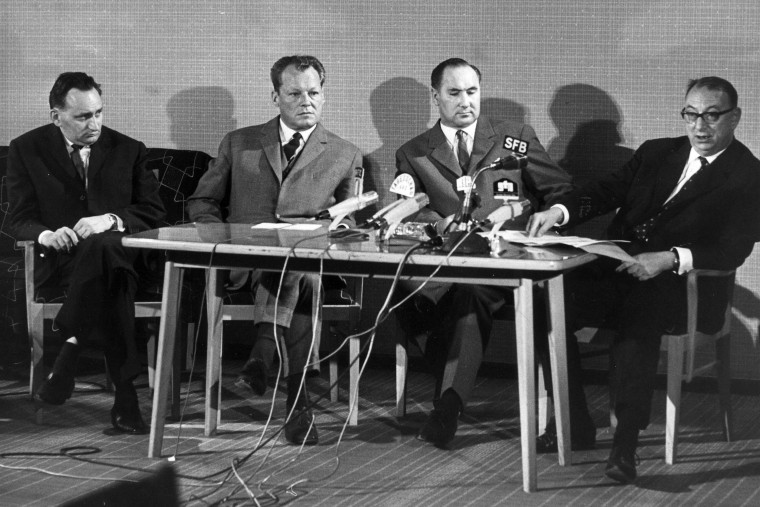 Willy Brandt’s political ascent takes place in a Berlin divided by the Cold War. As a Berlin representative in the Bundestag in Bonn and also as a member of Berlin’s House of Representatives, the social democrat fights passionately for West Berlin’s freedom and for Germany’s unity. After many years of power struggles in Berlin’s SPD, Brandt becomes Governing Mayor in 1957. The exceptionally popular politician leads his city through the Berlin Crisis, which reaches its climax with the construction of the Wall in 1961. During this time, Willy Brandt earns great respect worldwide. Bolstered by a triumphant election victory, beginning in 1963 he breaks new ground in the policy on Germany and Ostpolitik.

In 1947, Willy Brandt moves to Berlin to work at the Norwegian Military Mission. As press attaché he reports to the Foreign Ministry in Oslo about developments in the four-sector city which, like the remainder of Germany, has been under joint control by the four victorious powers of the USA, Great Britain, France and the Soviet Union since 1945.

Almost a year later, Brandt decides to change over to German politics because he wants to play an active role in the democratic reconstruction of the country. In 1948, the 34-year-old takes the job as Berlin representative of the SPD’s executive committee located in Hannover and headed by Kurt Schumacher. During that year, Brandt also regains his German citizenship.

Witness to the Cold War

In the city on the Spree, the young social democrat experiences first-hand the beginnings of the East-West conflict. Here the Soviet-communist dictatorship and parliamentary democracy clash directly. In 1948, the Soviet Union imposes a blockade against the three Western sectors of Berlin which are in turn supplied for 14 months by the Americans and the British by means of an “Airlift.” Finally, in 1949 the Cold War leads to the founding of two German states: the Federal Republic of Germany in the West and the German Democratic Republic (GDR) in the East.

In solidarity with the three Western Powers and at the side of Mayor Ernst Reuter (SPD), Willy Brandt fights for the freedom of the West Berliners and their close ties to the Federal Republic and the Western world. From 1949 until 1957, he is a member of the German Bundestag in Bonn; however, as a Berlin representative, he does not have complete voting rights. From 1950 on, Brandt also belongs to West Berlin’s House of Representatives.

Difficult ascent in the party

The New Berliner gains a quick foothold in the SPD’s regional organisation. Besides his activities as a member of parliament, Willy Brandt is, starting in 1950, also editor-in-chief of the party organ, “Sozialdemokrat” which is soon renamed the “Berliner Stadtblatt.” However, due to continuing high deficits, the newspaper has to cease operations in 1951.

Brandt’s ascent into the leadership of the Berlin SPD is made difficult, especially by its chairman, Franz Neumann, and his supporters who want to preserve the SPD as a traditional workers’ party while the wing around Ernst Reuter and Willy Brandt would like to open the party to all strata of society. Both camps are at cross purposes with regard to the Western integration of Berlin and the Federal Republic which Reuter and Brandt expressly advocate.

The two sides play hardball in the SPD’s power struggle in Berlin. Neumann collects materials about Brandt’s time in exile and uses it to slander his rival. In the elections for SPD regional chairman in 1952 and 1954, the incumbent keeps the upper hand over his challenger. But as early as 1955, Neumann cannot prevent Brandt from being elected President of the West Berlin House of Representatives.

By 1957, the popular 43-year-old finally has the majority of Berlin’s SPD behind him. Despite bitter opposition from his old rival, the regional party nominates Willy Brandt as successor to the deceased Otto Suhr for the office of Governing Mayor and also elects him regional chairman in 1958. For the most part he has Klaus Schütz to thank, who systematically won over delegates for him. Among the most powerful pillars in Brandt’s camp in the Berlin SPD are Kurt Mattick and Kurt Neubauer.

As was previously the case only for Ernst Reuter, Governing Mayor Willy Brandt receives wide national and international recognition. Accepted above party lines as the spokesman of free Berlin, he is one of the most stringent critics of the communist dictatorship of the SED in the GDR and a constant advocate for the re-unification of Germany in peace and freedom.

Owing to the Berlin Crisis which the Soviet party head Nikita Khrushchev causes in 1958 with his ultimatum, Brandt becomes known worldwide and becomes the most popular SPD politician in the Federal Republic. The Governing Mayor vigorously rejects the demands of the Soviet Union that troops from the USA, Great Britain and France must be withdrawn and West Berlin must be transformed into a “demilitarised free city.”

The fact that the West does not give in to Khrushchev’s threats, is also attributable to Willy Brandt’s major personal commitment. In close co-ordination with the federal government of Chancellor Konrad Adenauer (CDU), he insists on not changing Berlin’s legal status and maintaining free access to the city.

The crisis reaches its height with the total closing of Berlin’s sector borders on 13 August 1961. To put a halt to the mass exodus from East Germany, the SED regime under Walter Ulbricht builds, with the Soviet Union’s approval, a wall around West Berlin. The border wall separates families and friends and is a murderous barrier at which, until 1989, a total of 139 people lose their lives.

The brutal closing of the border, which represents a violation of Berlin’s Four-Powers status, is sharply condemned by Willy Brandt. The Governing Mayor expresses the indignation of the population and in a letter calls on the US President to take action. Indeed, John F. Kennedy reacts by increasing American troop presence in West Berlin. However, the USA does not intervene against the construction of the wall for fear of a nuclear war.

During that time, Brandt’s relationship with the West German government in Bonn is severely strained. In the 1961 election campaign, in which the Berlin social democrat is SPD Chancellor candidate for the first time, Federal Chancellor Konrad Adenauer denounces his opponent as “Brandt, alias Frahm.”

As Governing Mayor, Willy Brandt and his West Berlin Senate must deal with more than the sadness and frustration of Berliners who protest against the Wall and the deadly shootings of those trying to escape. The SPD-CDU coalition government led by him also faces massive economic problems. Because of the border closures, there is an overnight shortage of over 50,000 workers who previously commuted over from East Berlin. In addition, a good number of enterprises relocate to West Germany.

Due to generous financial aid from the Federal Republic, the Brandt Senate is able to stabilise the situation. Numerous new investments in infra-structure and traffic projects, in construction of dwellings and urban development as well as in cultural establishments augment the attractiveness of the walled-in city. Moreover, West German students and Turkish “guest workers” move to West Berlin, which at the same time becomes more dependent on federal funds.

After the end of the international crisis over Berlin which was coming along with the fortunate conclusion of the Cuban Missile Crisis in 1962, Willy Brandt is at the height of his popularity. With him at its head, the SPD achieves in the 1963 Berlin House of Representatives election the dreamlike result of 61.9% of the vote. With such backing, the Governing Mayor risks a new political departure. He declares an end to the coalition of many years with the CDU and brings the FDP into the Senate.

The change in the make-up of the coalition makes it easier to strike out on new pathways in his policy on Germany and towards the East. Since no one can brush aside the Wall at present, Willy Brandt and his most important adviser, Egon Bahr, want to at least make holes in it with a “policy of small steps.” In this they are supported by Federal Senator Klaus Schütz, Interior Senator Heinrich Albertz and the head of the Senate Chancellery, Dietrich Spangenberg. In late 1963, the Senate and the GDR government agree on a travel-permit accord whereby West Berliners can visit their relatives in East Berlin for the first time since construction of the Wall.

To become Foreign Minister in the Grand Coalition in Bonn, Willy Brandt resigns as Governing Mayor in late 1966. His successor is Heinrich Albertz who soon enjoys little success due to student protests in West Berlin and new factional struggles in Berlin’s SPD, which already used to cause Brandt much stress.