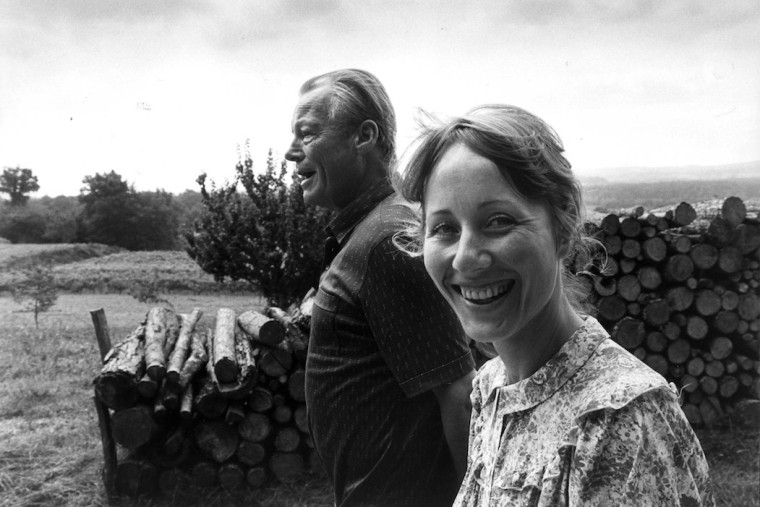 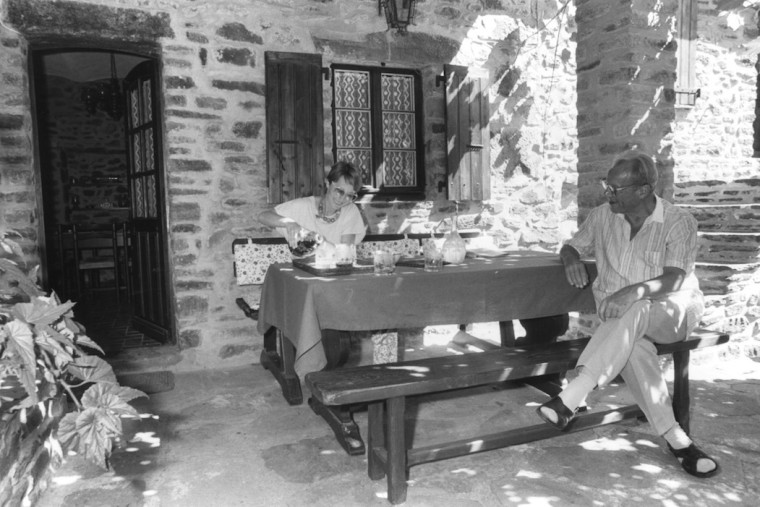 At the 1100th anniversary celebration of the city of Unkel Willy Brandt presents his wife a rose, 1 June 1986
© Lothar Schaack, Unkel 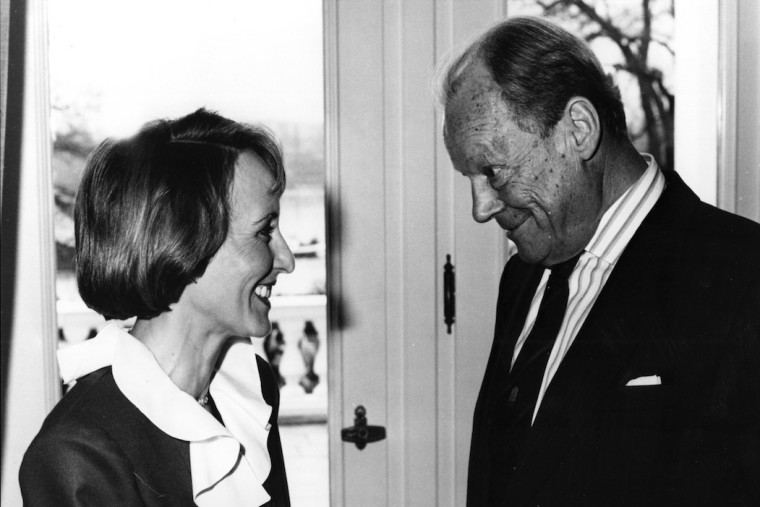 Having been a couple since 1978, Willy Brandt and Brigitte Seebacher marry in 1983. It is his third marriage. His life’s companion during his later years is an intelligent partner and a strong support for him.

The historian and journalist born in 1946 and the SPD chairman become acquainted in the Erich-Ollenhauer-House in Bonn where in 1977 she takes a job in the press office of the party’s executive committee. During the four previous years, as did Willy Brandt in the early 1950s, Brigitte Seebacher directed as editor-in-chief the social democratic newspaper “Berliner Stimme” (“Voice of Berlin”).

In Bonn’s SPD headquarters, the so-called “barracks,” Brandt’s attention is quickly drawn to the highly talented woman, and he brings her into his personal office as a speechwriter. He is quite taken with his co-worker, who excels due to an exceptional intellect and self-confident appearance.

Soon Willy and Brigitte also come closer privately. She accompanies him on foreign trips. When the SPD chairman suffers two heart attacks in late 1978, lies in the hospital for several weeks and ultimately completes recuperation therapy in France, the 32-year-old never leaves his side.

At this time Willy Brandt decides on a new beginning in his private life. This involves a separation from his wife, Rut Brandt. In early April 1979, he and Brigitte Seebacher move into an apartment in Unkel on the Rhine. The new relationship has a visibly positive effect on the 65-year-old. He appears to have rejuvenated. On 9 December 1983, Willy and Brigitte marry in a private ceremony and without media hype in the Public Records Office in Unkel.

Recreation in the vacation home in France

While on holiday the couple travels repeatedly to France. Both like the country very much. In 1983 they buy an old farm house in Gagnières, a village in the Cevennes Mountains of Southern France, and have the structure renovated in stages. Until 1992, the two visit their retreat several times a year to recover from work and to leave the daily grind behind.

Brandt reads many books, spends some time gardening, chops wood, goes to the market and makes himself useful in the kitchen during their holidays in France. Still, his enthusiasm for work in a household has its limits. But since living with Brigitte, Willy plants vegetables, lettuce and herbs and even dons an apron from time to time to help with cooking. He also knows how to prepare his favourite dish, leg of lamb with vegetables.

While her husband continues to be politically active, Brigitte Seebacher continues with her publishing work. In 1984 she earns her doctorate with a dissertation on Erich Ollenhauer and in 1988 she publishes a biography of August Bebel. Additional books and articles follow on political-historical controversies, such as in the 1991 work “Die Linke und die Einheit” (“The Left and Unity”).

Willy Brandt supports the research activities of his wife with words and deeds and edits her texts as well. Conversely he benefits considerably from her remarkable gift for phrasing. Brigitte Seebacher is especially effective helping with his farewell address as party chairman in 1987 and with his book “Erinnerungen” (“Memoirs”) which is first published in 1989. In addition, in September 1992 she drafts for Brandt the greeting to the Congress of the Socialist International in Berlin which her terminally ill spouse can no longer take part in.

In his final days as well, Brigitte remains at his side and offers strong support. When Willy Brandt is diagnosed with cancer in 1991, she tirelessly stands by him without condition. In their house in Unkel, where both have lived since 1989, she devotedly cares for her husband until his death on 8 October 1992.

In the service of remembrance

Two years later, his widow is significantly involved in the founding of the Bundeskanzler-Willy-Brandt-Stiftung (Federal Chancellor Willy Brandt Foundation) which commemorates the life and policies of the great statesman. Since then Brigitte Seebacher belongs to the Foundation’s Board of Trustees. In 2004 she publishes a book about Willy Brandt which describes him intimately and distinctively.