Government officials of Belgium, West Germany, France, Italy, Luxembourg and the Netherlands sign the treaties on the founding of the European Economic Community and EURATOM in Rome, 25 March 1957
© Bundesregierung/o.A. 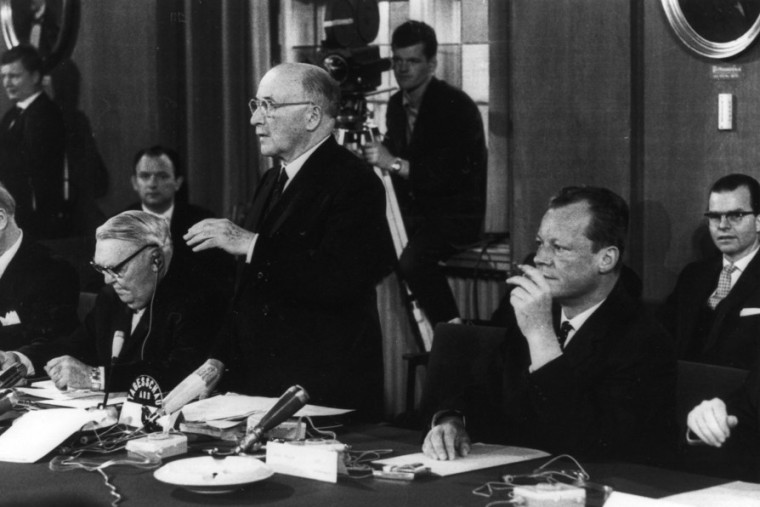 Ludwig Erhard (l), Jean Monnet (centre) and Willy Brandt at the meeting of the “Action Committee for the United States of Europe” in Berlin, 9 May 1965
© Archiv der sozialen Demokratie, Bonn 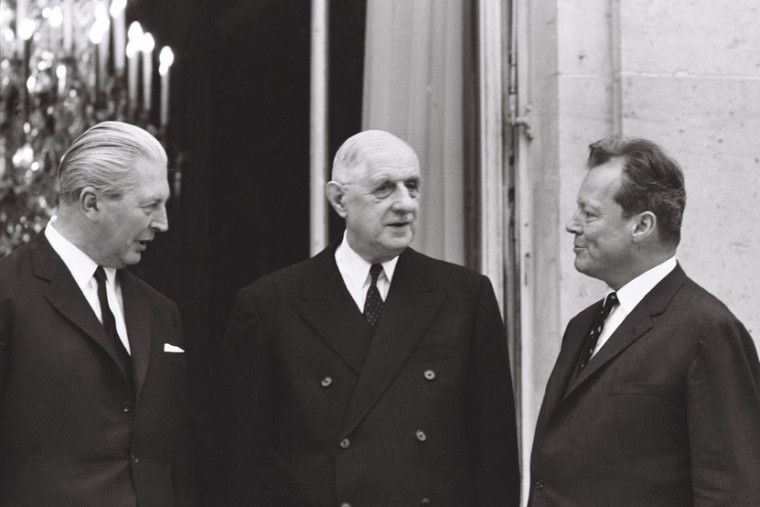 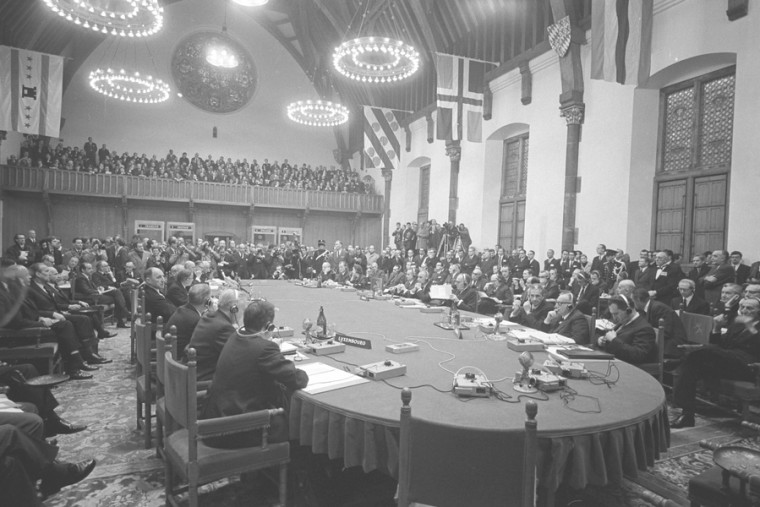 Summit meeting of the European Economic Community in The Hague, 1 December 1969
© Bundesregierung/Engelbert Reineke 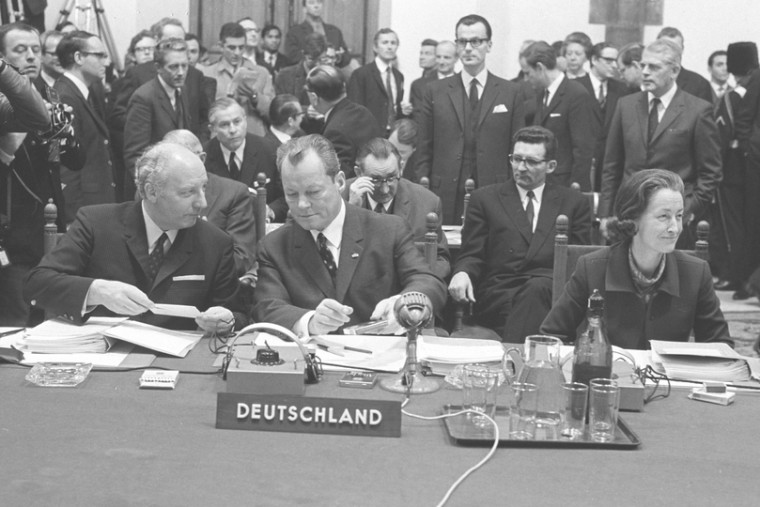 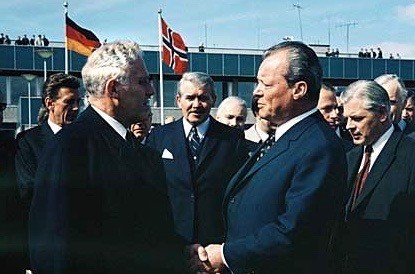 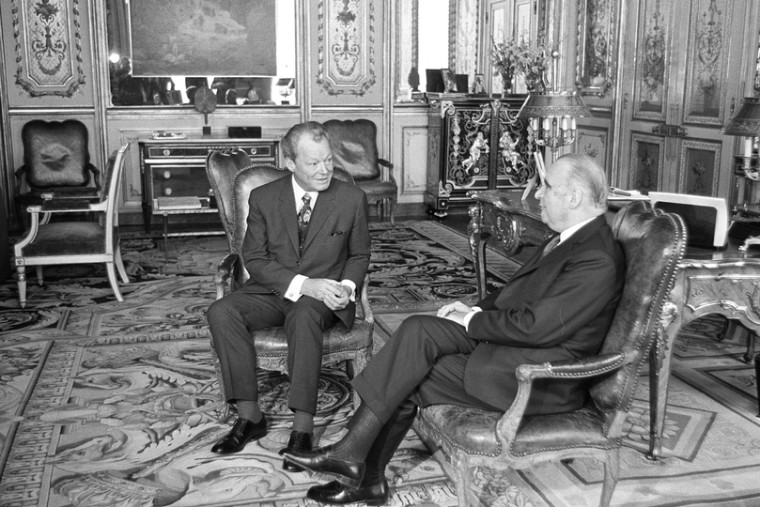 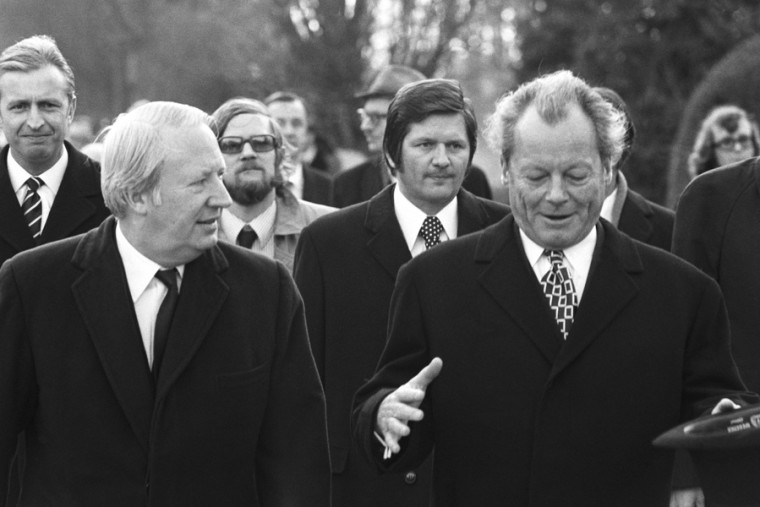 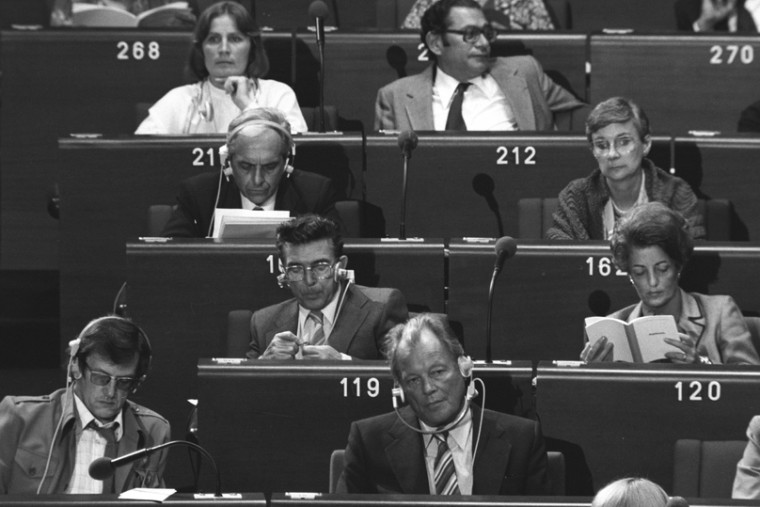 The representative Willy Brandt among the members of the Socialist fraction in the European Parliament in Strasbourg, 17 July 1979
© Bundesregierung/Engelbert Reineke

Since his Scandinavian exile, Willy Brandt is an adherent to the idea of a united Europe. During the Cold War he comes to the conviction that (Western) European integration is a pre-condition for being able to overcome the division of Germany and of the entire continent. As Federal Chancellor, Brandt plays a major role in the enlargement and deepening of the European Community, and as a member of the first directly elected European Parliament he is dedicated to the democratisation of Europe’s integration project. After the fall of the Berlin Wall, Brandt sees the chance for the unification of the whole of Europe which has always been his hope and his goal.

Ideas in exile on Europe

As a young man, Willy Brandt is already an adherent to the idea of a unified Europe. With this he is following in the footsteps of the internationalist tradition of the workers’ movement which strives to overcome national borders. Shortly after the beginning of World War II, Brandt speaks out for the first time for an integration of nations into a “United States of Europe”.

During his Scandinavian exile until 1945, he repeatedly calls for the creation of a “European Federation” whose concrete form remains uncertain. Directed against the Nazis, who want to unite and dominate the continent through violence, Brandt stresses that it should be a free and democratic Europe and a European Germany, not a German Europe.

Adaptation of the concept during the Cold War

After his return to Germany, Willy Brandt adapts his concepts on European policy to the new situation which has arisen due to the East-West conflict and the division of Europe. Since 1948 the Berlin SPD politician no longer speaks of a “United States of Europe.” For the foreseeable future, he sees no chance for a Europe as an independent “Third Power” between the USA and the Soviet Union.

Rather, Brandt pleads for that the countries of Western Europe – in close dependence on America and without abandoning the goal of a unification of the whole of Europe – begin with integration by finding common solutions for practical problems. From this point forward he relies on a pragmatic method: The co-operation should occur in the most meaningful form and not follow a previously determined structure.

In 1950, Willy Brandt fundamentally favours the young Federal Republic’s membership in the Council of Europe as well as the Schuman Plan which finally leads in 1952 to the founding of the European Coal and Steel Community (ECSC). However, he finds himself in a minority position within his own party. Because the SPD under its chairman, Kurt Schumacher, categorically rejects these first steps on the pathway to European unity.

Schumacher suspects that with this a capitalistic and Catholic mini-Europe is supposed to be created and a complete democratic socialist Europe be prevented. In general, the social democrats see the policy of Western integration conducted by Federal Chancellor Konrad Adenauer (CDU) as a hindrance for the re-unification of divided Germany.

Nonetheless, the Bundestag representative Brandt does agree with the sharp criticism by the SPD of the European Defence Community (EDC) which is supposed to create a European army with West German participation. He finds fault with the lesser membership of the Federal Republic and an insufficient co-ordination with NATO by the EDC which finally fails in 1954.

Not until the second half of the 1950s does the SPD change its policy toward Europe, which is enthusiastically welcomed by Willy Brandt. Under the leadership of Erich Ollenhauer, the party votes for the Treaties of Rome by means of which in 1957 France, the Federal Republic of Germany, Italy and the Benelux countries found the European Economic Community (EEC) and the European Atomic Community (EURATOM). Gradually, the SPD adopts Brandt’s position that West European integration is an important pre-condition for being able someday to overcome the division of Germany and of Europe.

From late 1966 on, as Foreign Minister in the Grand Coalition, Willy Brandt is able for the first time to play a direct role in European politics in Bonn and in Brussels. In doing so he concentrates on consolidating co-operation among the six members of the European Communities. His long-held wish to admit Great Britain and other countries has to remain on the back burner. The principal obstacle to this enlargement is French President Charles de Gaulle, who strictly rejects British membership.

In 1969, the change in government in France and in the Federal Republic pave the way for a new beginning. At the EEC summit meeting in The Hague in December 1969, Federal Chancellor Willy Brandt and President Georges Pompidou come to an agreement on beginning negotiations with countries wanting to join the EC. Together with Denmark and Ireland, Great Britain is admitted to the European Community (EC) in 1973. However, in 1972 Norway speaks against EC membership in a popular referendum.

In The Hague, the six heads of state and government also reach an agreement on European Political Co-operation (EPC) with which the EC countries co-ordinate their foreign policy for the first time. With the aid of the EPC it is possible to develop a co-ordinated West-European position at the “Conference on Security and Co-operation in Europe” (CSCE) in Helsinki in 1973-1975.

However, the USA puts forth considerable resistance to the fact that the EC begins to play a more independent role in international politics, which Brandt has repeatedly called for. Primarily due to this resistance, the Europeans fail in their efforts to mediate in the Middle East conflict.

From new departure to crisis

On 13 November 1973, Federal Chancellor Willy Brandt speaks as first government head of an EC member nation to the (not yet directly elected) European Parliament in Strasbourg. In this well-received speech, he calls for moving the unification of Europe forward. Brandt is firmly convinced that “The European Union will come about!”

Unfortunately, indications of a standstill in the process of European integration are no longer to be overlooked. The oil price shock of 1973/74 and the subsequent international economic crisis bring an abrupt end to a new departure for European politics which Willy Brandt co-initiated and played a major role in shaping. The EC’s plan to create an economic and monetary union by 1980 turns out to be too ambitious and must be filed away until the Treaty of Maastricht in 1991. Meanwhile, the social union which the German Chancellor suggested in 1972 still remains only a conception.

For the unity of all of Europe

After his resignation as Federal Chancellor in 1974, Willy Brandt remains passionately committed to European unity, most of all for the democratisation of the integration process. In 1979, as top candidate of the SPD, he enters the European Parliament in the first direct elections to that body which he belongs to until 1983 and for which he demands more rights.

With the revolutionary changes in Eastern Europe in 1989/90, the prospect finally opens up for the unity of all of Europe which Brandt has constantly hoped for. As early as the day following the fall of the Berlin Wall, he makes the famous statement in Berlin: “Now what belongs together will grow together,” to which he adds: “This applies for Europe as a whole.”

The question about the future architecture of Europe is also the subject of his last public speech on 4 May 1992 in Luxembourg. In it the former Chancellor pleads for the integration of the East Central European countries into the European Community. A future Europe needs, according to Brandt, a common foreign, security and development policy. In addition to this, he calls for a social union to join the already instituted economic and monetary unions.