Transatlantic Partners – Relations with the USA 1939–1992 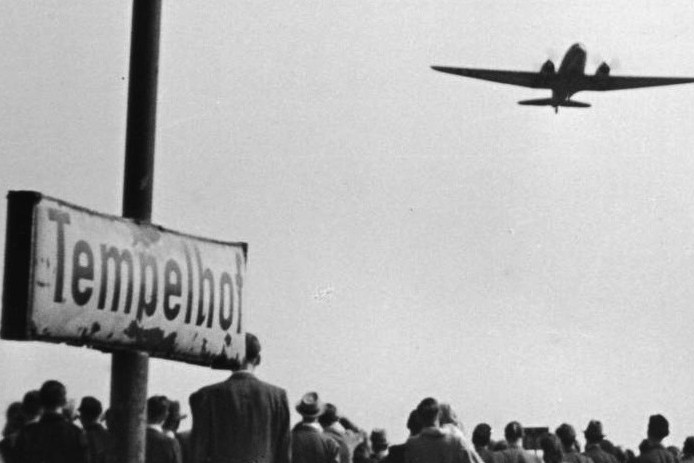 Tempelhof airport: during the Soviet blockade West Berlin is supplied by the Western airlift, 1948/49
© Landesarchiv Berlin 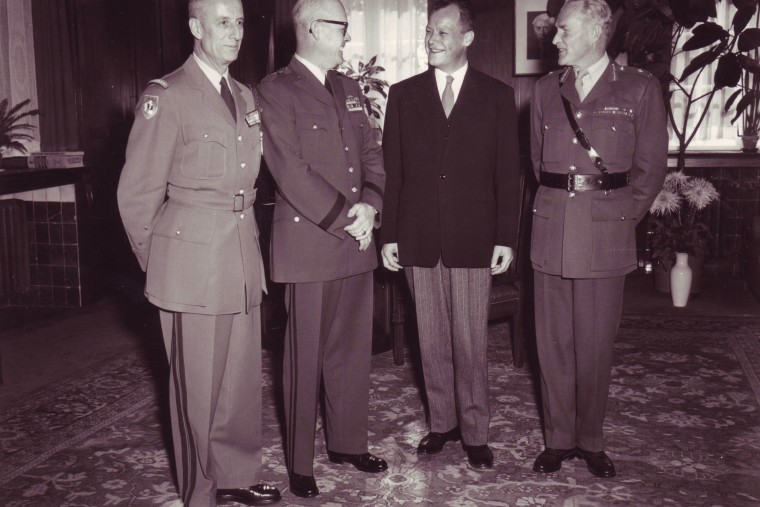 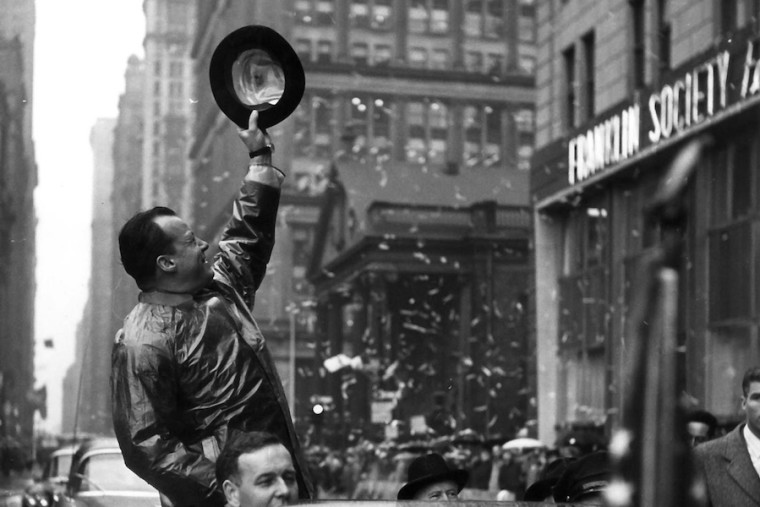 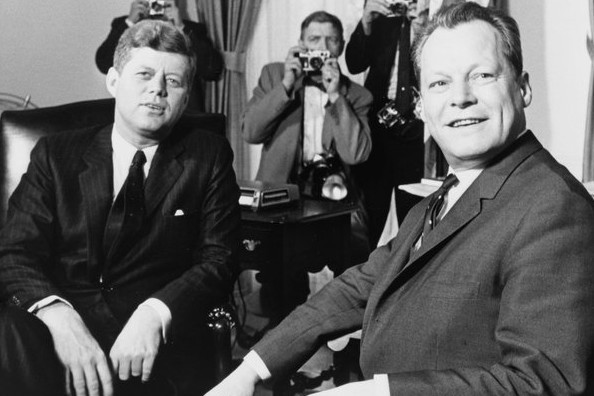 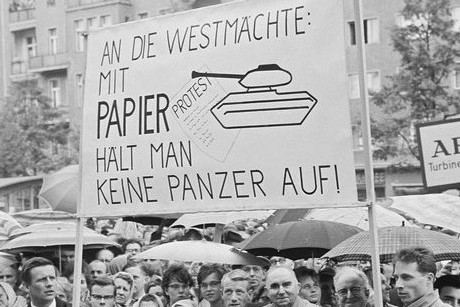 Demonstration of West-Berliners against the Berlin Wall in front of the town hall of Schöneberg, 16 August 1961
© Bundesregierung/Horst Siegmann 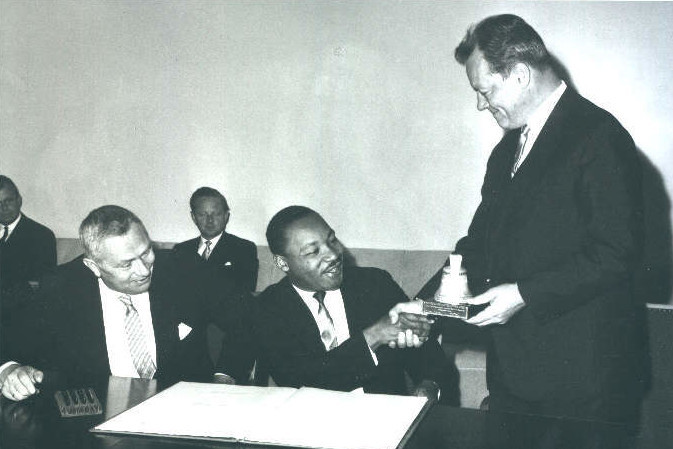 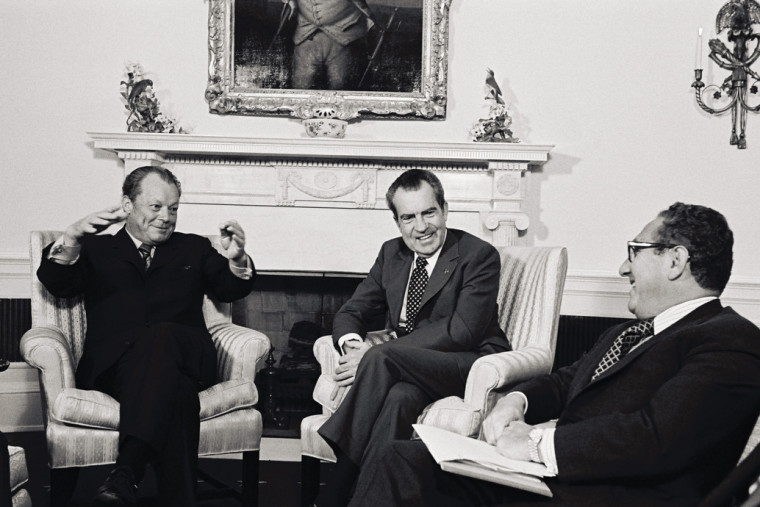 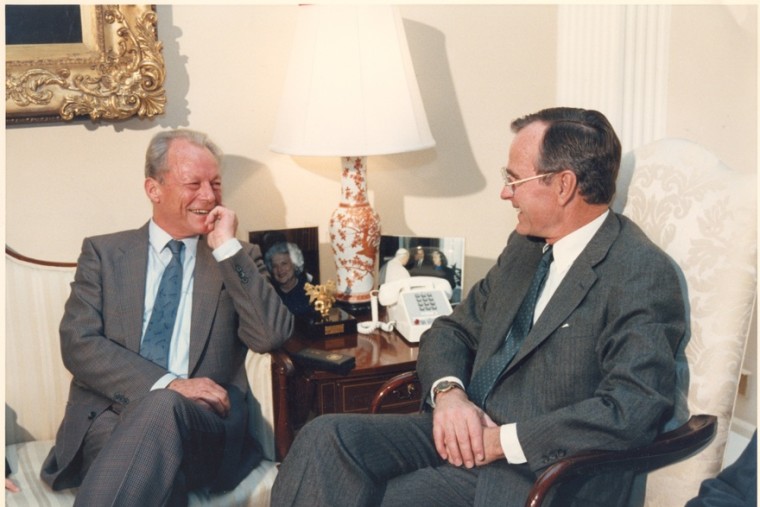 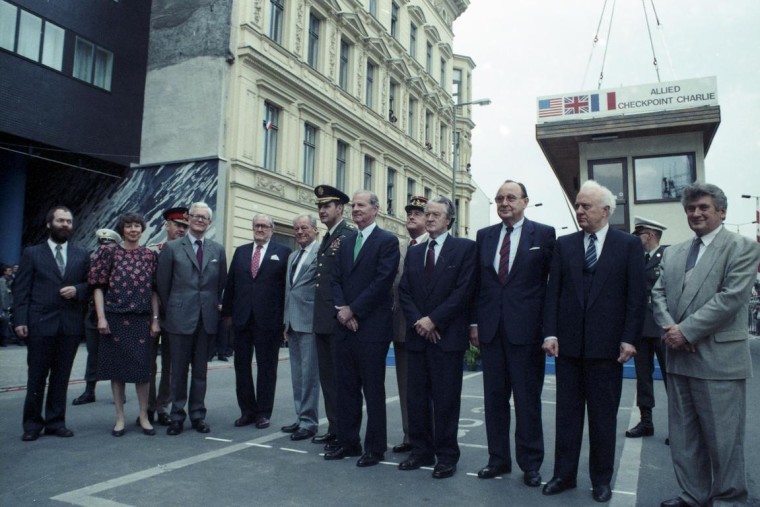 2+4 Meeting of foreign ministers in Berlin: Group photograph with Willy Brandt on the occasion of the demolition of Checkpoint Charlie in the Friedrichstraße, 22 June 1990
© Bundesarchiv, Bild 183-1990-0622-027/Peer Grimm

After initial contacts in the early 1940s, Willy Brandt develops close and friendly post-war relationships with the USA. For the Governing Mayor of Berlin and the Federal Chancellor in Bonn, the partnership with the United States of America is the indispensable basis of his foreign policy efforts. Regardless of occasional tensions with different US administrations and despite the criticism which he as an “elder statesman” directs at the USA, Brandt has a consistently positive image of America.

Common aspiration for a democratic Europe

During his exile in Scandinavia, Willy Brandt sees the United States of America as a beacon of hope in the fight against Hitler’s Germany and for the liberation of Europe. As the Stockholm correspondent for a New York news agency, he cultivates contacts since 1940 with Americans and with political friends who fled to the USA. At the start of World War II, for a time he considers the possibility of immigrating to America.

Brandt demonstrates his admiration for the freedom-loving, democratic system of the USA. He is especially impressed by the “New Deal” economic policies of President Franklin D. Roosevelt whose “one world idea” and the Anglo-American Atlantic Charta of 1941 greatly influence Brandt’s thoughts concerning the post-war period. He considers the USA to be responsible, in co-operation with the Soviet Union after the victory over the Nazi regime, for promoting the reconstruction of a democratic Europe and for assuring peace in the world.

Since the “Airlift“ against the Soviet blockade of Berlin’s Western sectors in 1948/49, the Willy Brandt views the USA as the guarantor of security, freedom and democracy not only in West Berlin but also in West Germany and in Western Europe. In the Cold War against the Soviet Union and communist dictatorship, he recognises America’s role as the leading power of “the free world” whose outpost is Berlin. Correspondingly, in the early 1950s Brandt calls for a partnership alliance between the young Federal Republic and the USA. With this he also hopes America will actively lend its support for the re-unification of divided Germany.

His transatlantic contacts which he began systematically establishing in the late 1940s, become even closer when Willy Brandt is elected Governing Mayor in 1957. With high-ranking American politicians, trade unionists and military personnel he constantly campaigns on behalf of Berlin’s interests and receives substantial support. During the second Berlin crisis, starting in November 1958, West Berliners are especially dependent on the support of the USA. Brandt’s appeals to the Americans not to yield to Soviet demands and to remain in the city along with the British and French are successful.

The construction of the Berlin Wall in 1961 puts his relationship with the USA through a difficult test. The passivity of US President John F. Kennedy against the closure of the border leads to a crisis of confidence for Willy Brandt. On the one hand it is overcome by American decisiveness about not abandoning West Berlin and on the other hand by the common conviction of Kennedy and Brandt that a policy of détente towards the Soviet Union and Eastern Europe must be initiated.

Harmony and dissonances in the era of Ostpolitik

As Federal Chancellor, Willy Brandt continually informs the US government from 1969 onward about his new Ostpolitik for which he seeks backing from the Federal Republic’s most important ally. In doing so he initially encounters strong reservations from President Richard Nixon and his National Security Adviser, Henry Kissinger. However, both soon recognise that Brandt’s course is compatible with America’s détente policy towards the Soviet Union and support him. The co-ordination between Bonn and Washington is especially close during the negotiations on the Berlin Accord of 1971.

The Chancellor avoids open criticism on the US war in Vietnam. However, the dollar crisis brought on by this military commitment does result in violent transatlantic turbulences in economic and currency policies. The Nixon administration views with increasing distrust the growing self-confidence of the Federal Republic brought about by its Ostpolitik.

Also, Brandt’s call for a stronger international significance for the European Community vis-à-vis the two superpowers becomes a cause of annoyance in the White House. Due to US weapons deliveries to Israel during the Middle-East War, a serious crisis in German-American relations occurs in late October 1973.

As President of the Socialist International (since 1976) and as chairman of the North-South Commission (1977-1984), Willy Brandt criticises the USA more openly than ever before. He accuses America of sliding back into the Cold War. In the early 1980s, the social democrat is worried about the massive military re-armament under President Ronald Reagan, especially over the deployment of US missiles in Western Europe in the course of NATO’s dual-track decision.

Not only the security policies of the USA but also its economic and financial policies as well as its conduct in Latin America run into strong objections by the SPD chairman. The result: As first US president, Reagan refuses in 1985 to meet with Brandt. The former Chancellor, who continues to maintain close contacts in the United States, decisively rejects the accusation of anti-Americanism.

By the late 1980s, the controversy surrounding this is no longer a topic of concern. The American-Soviet agreements on nuclear disarmament are hailed by Willy Brandt. The honorary chairman of the SPD also finds only words of praise for the role of the USA in the process of German unification in 1989/90. The peaceful re-unification of Germany is perceived by him as a success of the transatlantic partnership whose continuation and further development he deems necessary – for peace and freedom in Europe and in the world.

However, Willy Brandt does not welcome the military reaction of the USA in the 1990/91 Gulf Crisis. Since he fears a conflagration in the region, he speaks until the end of his life in favour of a diplomatic solution of the conflict. Despite this, on orders of the United Nations and under US command, allied troops liberate Kuwait from occupation by Iraq.